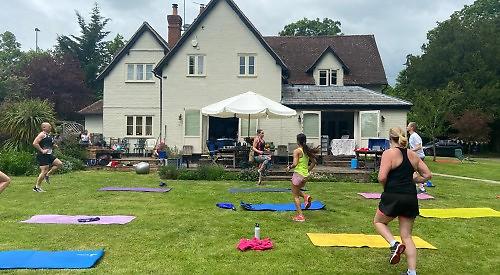 A GROUP of fitness fans took part in a four-hour exercise challenge for charity.

The event was organised by fitness instructor Victoria Wickins in the back garden of her home in Scarletts Lane, near Wargrave.

Mrs Wickins, 42, who has been running online Fiit Warrior classes three times a week during the coronavirus pandemic, said she was “overwhelmed” by the response.

The participants did sessions in blocks of 25 minutes each with exercises including burpees, shuffle hooks, star jumps, skipping and squat jumps.

There were drinks and snacks for them to enjoy in between sessions and music was played for motivation.

The exercise mats were kept at a safe distance to comply with coronavirus safety rules.

Mrs Wickins, who oversaw the challenge, said: “I was really pleased with how it went.

“There were a few moments in the days beforehand when I wondered if we would all survive.

“Not everyone said they would do the full four hours and we agreed that people could just to whatever was a challenge for them.

“It was very exhausting. We had five-minute intervals where people grabbed a drink and had a rest but everyone ploughed on.

“In the end all 15 people did it all, which was incredible. I was blown away by the sheer determination of everyone. We also had a couple of people join us online to cheer us on, which gave us a boost.”

The event was in aid of Syrian refugees and raised £2,500 with a further £5,000 coming from her online fitness sessions.

Participants made donations to True Vine Church in the Beqaa Valley of Lebanon, which provides food, education and healthcare as well as clothes, blankets, fuel and hygiene kits.

Mrs Wickins visited Syria in 2017 and was motivated by the plight of thousands of families displaced by the ongoing crisis.

She hopes to revisit the country later this year to take videos and show the fundraisers where their money is being used.

Mrs Wickins said: “We were fundraising for something so important and it was a real honour to see everyone finish. I am very grateful for the donations we have received.”

The Government responded with force and in 2011, millions of people fled Syria after civil war broke out and terror group ISIS began incursions into the country.

Refugees have sought asylum around the world but the vast majority live in neighbouring countries.

Mrs Wickins was first inspired to help the refugees after her husband Vaughan took part in a marathon in Jordan in 2016 in aid of Open Doors, a Christian charity which helps persecuted people around the world. He works for Zacharias Trust, an international Christian charity.

They have two daughters, Isabel, 10, and Chloe, eight, who attend Robert Piggott Junior School in Wargrave, while their five-year-old son Noah is at the infant school.

The True Vine Church has been helping refugees since the beginning of the crisis in 2011. There are more than 800,000 refugees in Lebanon alone and in the Beqaa Valley area there are 336,000.

Mrs Wickins added: “The refugee crisis is still ongoing. They are dealing with being displaced from their homes but they also have to deal with financial difficulties as well as covid.

“True Vine Church will help with every aspect of their lives, including healthcare, education and food. The support they offer is incredible.

“Seeing it for myself really changed my perspective. When you see families just like your own being completely displaced it is terrible. The rug has been completely pulled from under their feet and they have nothing.

“The best way to describe it is to imagine yourself being in a position where you have to flee your home. There is safety at refugee camps, away from the threat of war, but this support comes at a cost.

“My heart didn’t stop wanting and longing to support them when I got back home. There are hundreds of thousands, so what I am doing is just a drop in the ocean. It is also about the awareness and I really hope I have created that.”

Mrs Wickins intends to continue running Fiit Warrior classes remotely and will change to a different charity once she has reached her overall target of £10,000.

To make a donation, visit justgiving.com/crowdfunding/john15v17