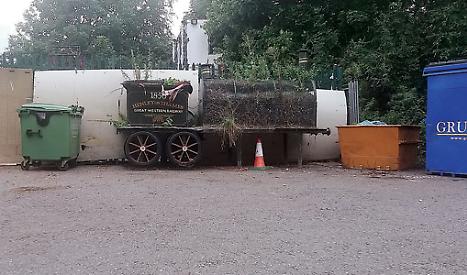 A HUGE pile of trade waste has been cleared from a council depot in Henley.

Personal trainers at the No Limits Gym in Reading Road complained after the bags of rubbish built up at the neighbouring council depot last week.

The bags came from shops and businesses in the town centre after the town council employed a contractor to take them away early in the evening to protect the town’s night-time economy.

The saga began in March when Grundon Waste Management, of Benson, unexpectedly stopped picking up the blue bags in the evenings and switched to morning collections.

In June the council employed another contractor, GT Can Do, of Henley, on a temporary basis to pick the bags up in the evening and stored them at the depot overnight for collection the next day.

A cross-party task force of councillors then negotiated with Grundon to resume evening collections from next week.

In the meantime, bags at the depot were left untouched and built up so the pile was several feet high, prompting the complaints from nearby businesses.

Councillor Stefan Gawrysiak, who leads the task force, said the stinking mound had now been cleared and more bins had been provided to store the rubbish at the depot. No bags had been left on the floor since Friday.

He said: “The situation has been completely cleared and all the rubbish is being stored in proper containers. It all complies with environmental regulations.”

Councillor Gawrysiak personally visited all the businesses in the area to apologise for the build-up of waste.

He said: “When Henley Residents’ Group was elected in May we promised to clean the streets of Henley, tidy up the litter and remove the business waste from the streets, which was damaging the night-time economy.

“We started the waste action group, which included two Conservative councillors. HRG is determined to keep the streets of Henley clean.”

During a council meeting last week, members of the opposition Conservative group criticised the temporary solution, saying the problem had just been moved to another part of town.

Councillor Julian Brookes, of the Conservative group, said: “Waste is a sensitive subject and has to be dealt with properly. We must work with our colleagues in HRG to find a good solution.

On Monday, Grundon will begin early evening collections on weekdays on top of two others made every day. The council is to find another contractor to do the weekend collections.

The company said the waste had built up as it had not been collected from the depot by its “competitor”.

A spokesman said: “Unfortunately, it seems that these collections have not been as regular as ours and therefore the amount of waste has exceeded the space in the containers we provided.

“As soon as we were alerted to this fact, we provided a further large waste container and trust this will keep the situation in check.

“Once our new collection service begins, our drivers will take over responsibility for collecting the commercial waste refuse bags and taking them to this area, so we will ensure they help to monitor the situation on a regular basis.

“We look forward to continuing to work closely in partnership with the local council and to helping keep Henley’s streets clean and tidy.”

• Councillor Gawrysiak has called for Henley’s streets to be cleaned three times a year. At the moment South Oxfordshire District Council deep cleans the streets once a year. Cllr Gawrysiak wants to introduce two extra cleans paid for by the town council. He said: “Two years ago we had three cleans but it was removed from the budget. This is clearly inadequate because the streets need some TLC. We have got to get some more pride back in the town.” He said businesses should look after their frontages and people should take litter home.