Signs will warn of pollution danger 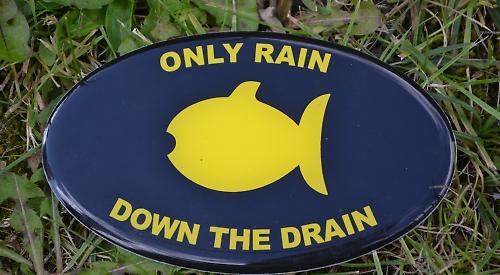 CAMPAIGNERS are urging Watlington residents not to pour anything down the town’s drains after its entire brown trout population was poisoned.

The Watlington Environment Group says it found 25 dead fish floating in Chalgrove Brook, which runs along Cuxham Road, along with thousands of dead shrimp.

It believes the deaths were caused by a toxic substance that was dumped in the stream and says it has found no live specimens since the discovery.

Now the group’s watercourses project is to install more than 100 plaques by the grates bearing the slogan: “Only Rain Down The Drain”.

They will be paid for by the Environment Agency, which investigated but couldn’t work out the cause.

They will begin going up in the autumn, starting by drains nearest the brook. Similar schemes already exist in Swindon and Maidenhead.

Mike Chadwick, the project’s co-ordinator, said: “I think a significant proportion of the population is not aware that what goes down the roadside grates ends up in the stream.

“Through carelessness and lack of thought, people risk causing damage without wanting to do so. This incident was upsetting but it reinforced the need to safeguard the trout.”

The fish that were killed were all young trout up to about 20cm long that had hatched within three years.

In recent years, volunteers have spent hundreds of hours improving the brook to help the fish thrive. They have created shaded areas and narrow, faster sections to offer protection from predators as well as gravel beds to aid breeding.

Parish councillor Terry Jackson, who is also a member of the group, said she and her colleagues had worked out when and where the poison was introduced.

However, the Environment Agency couldn’t identify it as they need to be on the scene within an hour of any substance being released.

She said: “It all happened so quickly and it wiped out the trout. We were really shocked and frustrated. There are still trout in Cuxham so if water levels rise enough we hope they might spread naturally.

“Almost anything could have been put down that drain, which is why this campaign is so important.

“We had been thinking about installing warning plaques anyway and this incident underscores the importance of doing it. No one should be putting anything down the drains and I think the closer the signs are to the brook, the more effect they will have.

“It will raise awareness of the threat not just to the trout but the local ecosystem in general.”

The group hopes to put up signs displaying the Environment Agency’s helpline number.

Mrs Jackson said: “If anyone sees anyone emptying something down a drain or sees fish looking dicey or dead they’ll be able to phone the agency directly.

“At the moment, people are alerting a member of our group and that member then has to phone the agency. By that point it’s too late to investigate properly.”

The parish council has agreed to part-fund a leaflet to go to every household in Watlington raising awareness of the project.