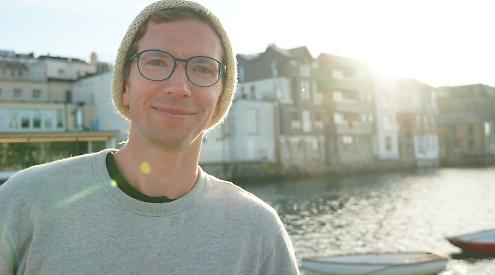 A MAN from Watlington has spent a month in war-torn Ukraine helping people on the front line.

Tom Robinson, 36, works for Heks, a Swiss organisation providing humanitarian assistance around the world for victims of armed conflicts and natural disasters.

He has worked in war zones such as Iraq and in 2019 spent six months in Donbas in eastern Ukraine.

When Russia invaded on February 24, Mr Robinson spoke to friends and colleagues in the country and decided to go back to help.

He said: “I’ve worked for humanitarian organisations for the past 10 years and worked in Ukraine before so I felt a strong attachment to it.

“I had just finished a mission in Sudan and came home to Watlington for a break but then the invasion started and hearing everything that was going on there, I decided to go back to help with the emergency response and setting up a team to help people that needed it the most.

“I’ve done emergency responses during armed conflicts before and this time it was about looking at the map and trying to understand where we wanted to set up in order to help as many people as possible.”

As Russia invaded the country, most organisations set up their operational bases in Lviv in western Ukraine, about 40km from the Polish border.

The city has not been attacked so far and the United Nations established a travel route for humanitarian supplies to reach it from Poland.

However, having supplies going to Lviv means the aid organisations have to move it over long distances to reach people in the centre and east of the country which are the most affected.

Mr Robinson helped set up operations in Odesa, a city port on the Black Sea which has not been taken over by the Russians. This way supplies can be moved in and out of neighbouring Moldova.

As part of the operation, Heks hired Ukrainian team members and provided grants to build the capacities of Ukrainian non-governmental organisations. It also set up supply lines to send vegetables, grain and medicines by train to hard-hit areas such as Kharkiv.

Mr Robinson said: “We ended up setting up operations in Odesa and dealt with health and medical supplies and food security, basically ensuring people can access food.

“We also do direct bank transfers to people who need transport from the most affected zones.

“We didn’t think this would happen and we didn’t think Russia would invade fully. Having the Russians trying to get to Kyiv and Kharkiv was a complete surprise and we were shocked to see it happening.

“It was emotionally jarring. Coming here you think you know what to expect because you see it in the news as there’s usually a huge focus on the east of the country.

“In Odesa we were expecting a degree of violence but not as much as in Kharkiv. You are always scared and always aware of the conflict that is happening in the centre of the country.

“There is no invasion in Odesa but you are never sure and it’s the unpredictability that is scary. It’s horrific seeing people living in basements and metro stations and very horrible to experience on a daily basis.

“I thought I had seen a degree of it before but seeing it at this level is just appalling. When it’s guns you can try to put distance between you and them but here you hear sirens and explosions and you just have to hope it doesn’t land on you.”

He visited the affected areas in Kharkiv. Mr Robinson said: “I wanted to see them for myself to understand and try to help them. We saw the front line and got inside the metro station, where you see mainly old people that don’t have anywhere else to go.

He said that most big NGOs already had funds and urged people to donate to volunteers working directly on the ground, including Kharkiv & Odesa Humanitarian Help, a group working to help deliver essential items to vulnerable people still in Kharkiv.

It also provides food to displaced people coming through Odesa and helps them with the transfer process.

Mr Robinson said: “Big organisations are already well-funded and smaller groups can use the donations more wisely. There is a lot of groups like this that do amazing work on the ground.

“The real heroes have been the Ukrainian people and the way they have mobilised themselves has been amazing. The support they are giving is really impressive.

“But the focus seems to be on what big organisations are doing and not on the people of Ukraine. I think there are a lot of unsung heroes in this conflict.”

Mr Robinson grew up in Henley and attended Trinity Primary School, Gillotts School and The Henley College before studying politics and international relations at the University of Kent.

He said: “I’ve always wanted to be in a position where I could help people and the humanitarian side of it was always really strong for me. When working in the Middle East and Africa, you are always surrounded by conflict but it gives you the opportunity to see what the world is like and a different life from what we are used to in the West.

“We take so much for granted, what people living through conflict are experiencing on a daily basis is incredibly tough and upsetting but also fascinating to experience.”

After university, Mr Robinson trained to become an army officer but then decided he didn’t want to join the army and went back to university to study international relations and diplomacy.

His first humanitarian mission was in Iraq in 2012, where he spent six years.