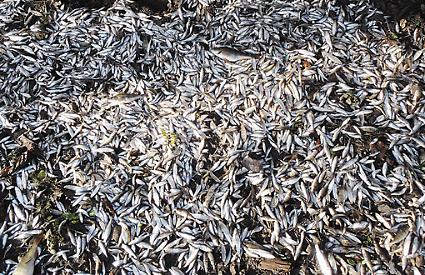 THOUSANDS of fish died on the banks of the Thames near Goring as the floods began to subside.

Up to 5,000 perch, roach, dace, ruffe and minnow became stranded on farmland a few hundred yards south of the village on the Oxfordshire bank.

A member of the public spotted them while walking along the Thames Path on Thursday last week and alerted the Environment Agency.

At this point, the fish were still alive in a small pool of flood water. The agency’s officers notified the landowner and visited the next morning with nets to return the fish to the river but by the time they arrived, the water had drained away and most of the fish were dead.

Fisheries officer Tom Sherwood estimated that between 3,000 and 5,000 fish were strewn along a 30-metre stretch. Most were juvenile specimens between one and two years old.