BUSINESSES and residents were hit by flooding over the holiday period  and theres more rain on the way.

Flood alerts have been in place in some areas since Christmas Eve and levels of the River Thames are expected to rise further with more wet weather forecast over the next few days.

Click here to view our picture gallery of some of the areas affected.

Some businesses were forced to close temporarily following widespread flooding on low-lying land in Henley, Shiplake, Wargrave and Sonning.

The car park of the Flowing Spring near Playhatch has been underwater for more than a week. 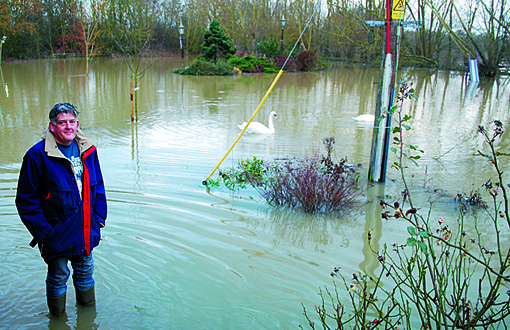 Nick Willson, who runs the pub with his partner Hazel Lucas, woke up on Christmas Day to find 3ft of water had flooded the car park for the second year running.

He said: We thought, here we go again. The stream around the car park was quite high on Christmas Eve so we moved all the garden furniture but we were shocked by how quickly the water came up.

Mr Willson said they had lost passing trade, explaining: The pub looks so uninviting and even though we are open, people dont tend to stop or they dont realise that they can park in Spring Road. Brewer Fullers, which owns the pub, has agreed to put a flood defence wall around the car park.

Mr Willson said: It is great that Fullers are going to do this and hopefully it will solve the problem once and for all.

Every week that the car park is flooded they dont charge us rent so last year we reckon they probably lost £15,000 in lost rent and beer sales and we lost about £20,000.

The Country Gardens garden centre in Playhatch was closed last Friday and on Sunday due to flooding.

Jacky Biddle, plant area manager, said: It is mainly ground water. Luckily we are like a well-oiled machine these days and we know what is going to be affected so stock has not been damaged.

Michael Emmanuel, who runs the French Horn in Sonning, said the hotel gardens were flooded but custom was not affected.

He said: Its not been as bad as it was for the majority of 2012 and the beginning of last year. We have lost our lawns to the water but nothing more serious than that. It is business as normal.

The views are absolutely fantastic. We probably have the best river views in the South.

In Henley, the riverside seating area at the Angel on the Bridge was also flooded and some water got into the cellar.

Tristan Marton, who works in the pub, said: Thankfully, it has been nothing like last year.

The towpath along Mill and Marsh Meadows is submerged and staff at the River and Rowing Museum are monitoring weather forecasts.

Supervisor Christine Carey said: We have got away with it so far. The river is still a bit swollen and we are expecting more rain but, so far, we have remained open as planned.

Tony Mayes of Henley Road, Wargrave, said the water level rose about 18in to flood his garden and boathouses.

He said: I think the problem is that the ground is saturated and there is nowhere for the water to go, so it floods.

We have to move all the boats about, which is fun and games we could do without.

Magician Paul Daniels, who lives near the rver in Wargrave, said his garden was covered in a couple of inches of water.

Every year our garden gets covered but luckily it doesnt come up to the house, he said. At the start of last week, a 24-hour storm caused transport chaos.

Torrential rain and winds of up to 70mph brought down trees on roads, causing delays to drivers, while trains were also disrupted.

A total of 2,000 homes in Henley and Shiplake were without power for about two hours on Monday last week.

Teams of council workmen, firefighters and police worked through the night to clear trees from roads as well as debris from broken branches and wheelie bins that had been blown over.

Mr Mayes said the strength of the wind was second only to the great storm of 1987.

We have stone planters nearly a metre square and they blew over, he said. I tried to pull them back up but they were too heavy.

The Environment Agency warned people to be prepared for more flooding due to the risk of more heavy rain coupled with strong winds.

A spokesman said: We are monitoring the situation very closely as river levels remain high and responsive and standing water remains in some flood plains.

We urge communities to prepare in advance by signing up for free flood warnings and to take action if they receive one. A flood warning indicates that flooding is expected and immediate action is required.