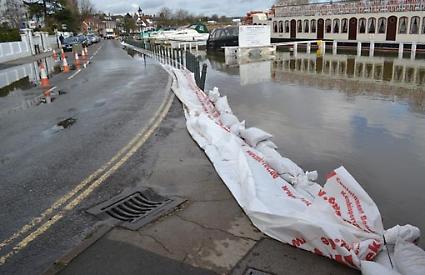 The army was called into Hurley to help residents protect themselves against the floods.

Members of the armed forces handed out sandbags in the town and portable toilets were also installed by the Royal Borough of Windsor and Maidenhead council.

An inflatable boom has also been put in place along the waterfront in Thames Side, Henley to prevent flooding.

It stretches from outside Hobbs of Henley towards the Angel on the Bridge pub and is filled with water to inflate it.

Firefighter Paul Herrington, watch manager at the Henley station, said: The boom is designed to stop the water coming out onto the road. Once in place, we pumped the water from the road back into the river.

Roads in and around the town were re-opened after floodwaters receded last night.

Bell Street, New Street and Riverside are all open, while Thames Side is on one lane with temporary traffic lights in operation.

However, the B478 in Playhatch has been closed in both directions due to flooding and erosion.

It may be some time before the road is accessible to undertake the necessary inspections to fully understand the extent of the damage.

For the time being we have put barriers in place across the whole road to make sure that no-one is put at risk.

Bin collections could be affected by the floods after South Oxfordshire District Council warned residents to expect delays.

The council says road closures throughout the region mean collections could be carried out later than usual.

They expect delays to worsen over the next few days as more rain is predicted.