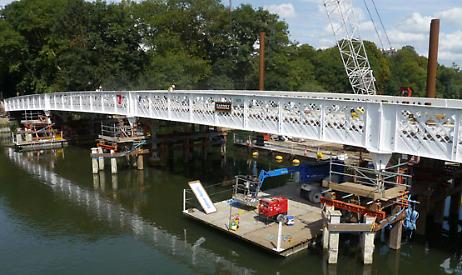 THE cost of crossing Whitchurch toll bridge has increased slightly for residents using a discount scheme.

A £20 top-up for owners of a “bridge card”, which is only available to those living nearby, now only pays for 47 crossings whereas previously it bought 50.

This means the cost of a single journey on the card, which is believed to account for about half of all trips, has gone up from 40p to just over 42.5p compared with the full toll of 60p.

The change was implemented on Monday and announced with no further explanation by notices on the toll booth at the bridge’s northern end.

The General Estates Company, which bought the 18th-century crossing from the Company of Proprietors of Whitchurch Bridge in 2019, is entitled to raise concessionary tolls to a maximum of 45p until 2026 or until it gets the Government’s permission to increase the full toll.

This last went up from 40p in 2015 following a public inquiry.

During the first coronavirus lockdown last year the company suspended the toll, which goes up £4 for vehicles weighing more than 3.5 tonnes.

The company said there were no plans to raise the concessionary rate again within the next year.