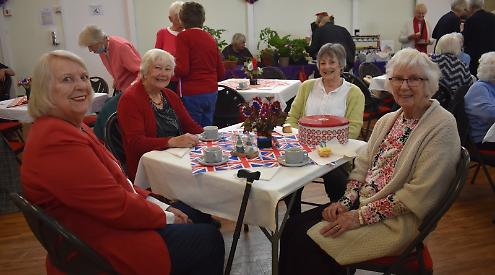 A TEA party was held and a post box was decorated by Sonning Common Women’s Institute.

On Wednesday, June 1 the WI branch held its monthly coffee morning at the village hall in Wood Lane with a royal theme.

Guests dressed in red, white and blue and were admitted free.

There was a raffle, sales of cake, donated books, CDs, board games and vintage jewellery. The Greenshoots nursery in Peppard had a plant sale.

A total of £400 was raised from the event, which will be donated to local charities.

Jenny Ward, branch president, said: “We were delighted with the reception and enthusiasm of the large number of people who attended. After all the difficult times of lockdown, it was a pleasure to be able to celebrate in this way and give thanks to her majesty for all she has done.”

Meanwhile, out in the street, WI members placed a knitted topper on the post box which comprised the Queen with a handbag, a soldier, two corgis and flowers. Christine Gibson knitted the Queen and Pat Kitt made the soldier from her own pattern and one of the corgis.

Marylin Mowatt stitched the post box cover, the flowers and a corgi.

The women spent some time making the topper at their craft group, which takes place once a month, and the rest at home. It took them three weeks to finish.