Pupils disciplined for "blacking up" 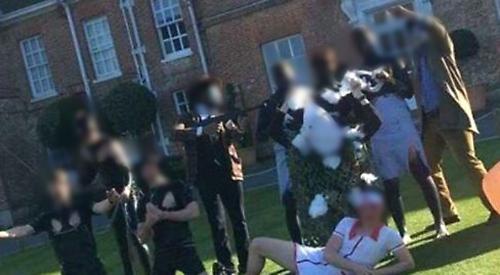 SIX students at the Oratory School in Woodcote have been disciplined after they were photographed in the school grounds wearing “blackface” make-up and dressed as slaves.

Three of the group, who were white, wore the costumes and shackles of cotton pickers in the American South and were accompanied by three black classmates, who wore white make-up and dressed as “slave masters” with toy guns. One appeared to be wearing a white hood and robes.

The photo was taken on the independent Catholic boys’ school’s front lawn shortly after its annual leavers’ photos were taken. After posing for a formal shot, students then changed into fancy dress for an informal one.

Headmaster Joseph Smith, who was present, dismissed the five boys and would not let them appear but it is understood they returned later in the day.

They appeared alongside three other boys dressed in sexually suggestive outfits, another dressed as male genitalia and a fifth dressed as a nurse. The photo was uploaded to Instagram with the caption: “revolt”.

A spokesman said the school was not aware the photo had been taken and did not consent to it.

He said: “We are extremely shocked and saddened that this has happened and apologise unreservedly for the offence caused. We are dealing with this matter internally and we have punished the pupils as part of our disciplinary process.

“The Oratory School unequivocally condemns racist imagery of any sort. We are a diverse and inclusive community and will strengthen our tutorial programme to ensure that it is understood by all our pupils that such representations are utterly unacceptable.”