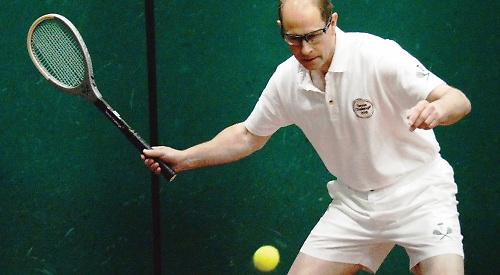 PRINCE Edward was undefeated as he played three sets of real tennis during a visit to the Oratory School in Woodcote.

The Earl of Wessex spent more than five hours at the independent Catholic boys’ school on Thursday last week as part of a global tour to promote the sport.

He will visit all 50 or so courts around the world, during which time he will also raise awareness and funds for the Duke of Edinburgh’s Award scheme.

His trip to Woodcote is believed to have been the village’s first royal visit in living memory.

The prince arrived at the school’s sports centre wearing tennis whites under a white tracksuit and trainers.

He was greeted by a group of pupils from Woodcote Primary School, who cheered loudly and waved Union flags.

He smiled, waved back and shook their hands while teachers took photographs and videos on their phones.

Other guests included governors, staff and members of the school’s real tennis club and Hardwick House Tennis Club, which plays on a court at Hardwick House in Whitchurch.

Also present was Richard Gray, managing director of Grays of Cambridge, which is one of only two companies that make real tennis racquets. After enjoying tea and cake, the prince watched as children from other schools, including Langtree School in Woodcote and Pangbourne College, played racquet sports including lawn tennis, table tennis and badminton.

He was then escorted to the school’s real tennis court, which is one of only 24 in Britain, and chatted with pupils about the sport before posing for photographs and giving advice on technique.

The prince removed his tracksuit and played three doubles sets, including one with junior Archie Mayer against Harry O’Sullivan and Oriol Mata, which he won.

He then won another set against members of the school’s real tennis club, who had bid for the chance to play him in a fund-raising raffle. The third set resulted in a draw. After the action, the school hosted a barbecue and presented a cake shaped like a real tennis racquet which was baked by its kitchen staff.

The Prince cut the first slice before pieces were handed out to the guests.

He then talked with students, including school captain Ed Bromilow, who are working towards their Duke of Edinburgh’s Awards.

Edward is now patron of the scheme following the retirement of his father Prince Philip, who launched it in 1956.

Following a welcome speech by Mr Smith, the prince gave a short address in which he praised the school and then presented Mr Seigneur with a certificate to mark the occasion. Before he left, he gave Mr Smith a special Grays racquet bearing his initial and the royal crest.

Mr Halsall, who organised the royal visit, said: “It went incredibly well and we were pleased that we could share the day with children from Woodcote Primary School as we felt it was important to involve the wider village community.

“The children were really excited and it was lovely that he could arrive to such a loud, lively and enthusiastic reception.

“It was such a wonderful day and we were fortunate to have such good weather as it set the tone for the rest of the visit, which went like clockwork.

“It never once felt in the least bit strained or onerous and His Royal Highness was an absolute pleasure to host. He was far more keen to meet and chat to people than we could have wished for and really gave everybody his time, especially the pupils.

“We thought he would just observe the games but he waited for a break in play before bringing the students over for a chat, which they were absolutely thrilled by.

“He had a word for just about everyone and I think the school looked its absolute best for him so we’re proud of how we came across.

“It was a memorable occasion, especially for the younger ones who had never met a member of the royal family before.

“We don’t yet know how much we raised but we had some very generous bids and we would like to thank everyone for their support.”

Liz Hunt, headteacher at Woodcote Primary School, said the pupils knew nothing of the visit until that morning.

She said: “They’d been making the flags and bunting in advance but we said it was for our school fete. On the morning, they came in for assembly and we gave a short presentation about the royal family and explained who Prince Edward is.

“We then told them about the invitation and there were lots of gasps, cheers and shouts before we marched straight off. They were very excited and couldn’t wait to meet him.

“He must have spent at least 15 minutes with them and during that time he answered all their questions beautifully. It was absolutely adorable and they loved every minute of it.”