Yes minister, I can make you a red despatch box 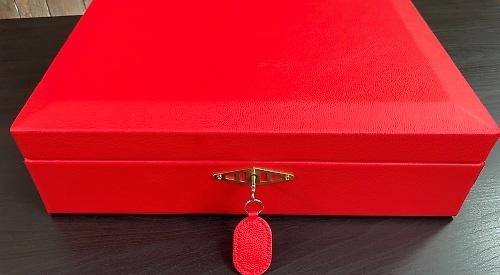 THIS red leather case was made in Woodcote and is now being used to hold confidential government papers.

It was commissioned by one of Boris Johnson’s ministers from leatherwork specialist Jonny
Aldridge.

He received an email from the minister’s personal assistant asking if he could make a modern version of the despatch boxes that have been in use by the monarch and the Government for centuries to carry important documents.

Mr Aldridge, 51, who is the fifth generation of his family to work in the saddlery trade, said: “I had an email from a guy asking if I could make the leather handle but then the box became the job and I’m always up for a challenge.”

The minister’s PA explained that there were issues with the firm that usually made the boxes so he had decided to commission someone else and hoped for a better price.

Mr Aldridge said: “They are distinctive as they are always made from red leather and the box opens from the opposite side from the handle. This is so the person handing it to the minister can’t see the contents.

“There is no stitching, so the box looks like it is covered in one piece of leather.”

He spent four days working on the briefcase in his workshop at Church Farm, off Reading Road.

He covered each side of the wooden box with 0.8mm flame red leather and hand-made the handle using several layers of the same material.

The box was finished with solid brass fittings and the inside was covered with purple velvet.

Mr Aldridge said: “Usually I can make three belts in a day, so spending that amount of time on a singular item was a big job for me.

“It took over my life and I had some sleepless nights where I didn’t know how I was going to make it work but it looked amazing when I had finished it.”

“The client was over the moon,” said Mr Aldridge. “I was commissioned to make another one and I’m hoping it will be easier this time around.”

Mr Aldridge’s great, great grandfather opened a harness shop in Friar Street in Reading in 1879. As lifestyles and technology changed, the firm moved on and harness work was replaced by saddlery and leather goods in 1925.

The premises doubled in size with the purchase of the unit next door and the saddlery remained a part of the business until 1990, when it was no longer needed due to changing tastes in luggage and business cases.

Mr Aldridge and his father Peter ran the shop until it closed in February 2016.

Now he runs the business alone from his premises in Woodcote and specialises in Samsonite replacement and spare parts, having become the UK’s leading supplier to both the trade and the public.

Mr Aldridge, who lives in
Grimmer Way, Woodcote, started making leather belts when he was 17.

He said: “When I finished college, I wasn’t sure what I was going to do so I started to work with my dad in the shop and fell in love with the business — it definitely runs in the blood.”

His father had started working at the shop when he was 16 after his grandfather retired.

“It was so busy back in the day, when everything was handmade,” said Mr Aldridge.

“When my dad worked there with his dad, there were 10 full-time leather workers in the workshop upstairs.

“When I started there were two. It was pre-internet and it was a very busy environment.

“I did a bit of everything: I was learning how to work with leather and how to manage a shop and deliveries as well as making cups of tea for my dad.

“The first belt I made is probably still my favourite item. I wore it every single day until the shop closed and I still have it. It’s black and hand-sewn with a silver buckle.

“I was very fortunate that my dad was not only my boss but also my best friend. We got on really well and he taught me everything I know.

“I was lucky he was still here to help me make the decision to close the shop. I couldn’t have done it on my own. The main reason was that high street retail was declining, mainly due to the internet. The big firms sell from their websites, so people can buy directly from them.

“I’m very grateful I don’t have a high street shop now as it would have been a disaster to make it work with covid.

“But I miss the building. I had been going there since I was born so there was a sentimental attachment to it.

“My family thought it was the right decision to close the shop but I had a few customers who were quite upset about it. My dad would be proud the business is still going.”

All the products are handmade using traditional methods and tools handed down through his family. Each item is bespoke and made to order.

Mr Aldridge said his customers preferred handmade products because they lasted a lifetime.

“It’s a bit more expensive than the stuff you can buy directly off the shelf but it is bespoke, which means there won’t be any other item that looks exactly like yours,” he said.

Mr Aldridge would love for his daughter Ciarah to continue his legacy.

He said: “She is only 10, so we will have to wait and see if it’s something she likes.

“But business is definitely getting busier again so I’m looking to get someone in to teach them the trade.

“People now know that I’ve moved and where my new shop is. They found my website and know that they can still get the same quality from me.

“Now that the business has moved onlin, I have clients worldwide but especially in America, Australia and Europe.

“The Samsonite spare part of the business is also getting busier now that people are starting to fly again. I have about 50 spare parts to ship every day but belts remain the most popular item I sell.”