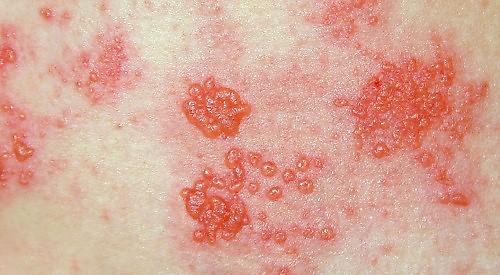 SHINGLES, a name that manages to be at once cheerful while also being slightly sinister. It would be a good name for an untrustworthy clown.

You’ve no doubt heard of shingles and the associated skin rashes that can often be very painful.

It’s reasonably common, more so in older age groups, and it is thought that around one in four adults experiences it at some point in their lives.

Interestingly, prior to 1950, it was not really taken as seriously as we take it now. Much of that has to do with our understanding of the disease.

Going further back, the characteristic raised blistering lesions would often be mixed up with other skin conditions from erysipelas to even smallpox — interesting because these are all serious conditions in themselves.

In hindsight, the rash does have a very characteristic appearance but what really confirms the diagnosis is the fact that shingles appears only on one side of the body — it never crosses the midline.

Furthermore, shingles tends to appear only in sections of the skin that correspond to the nerves that supply them, resulting in sometimes quite well demarcated borders.

These dermatomes are what gave rise to a scientist called Richard Bright proposing correctly that the disease affected the spinal ganglion. Shingles is caused by a virus. Not only that, but it is one with which we are quite familiar.

During the early 20th century, scientists began to observe that there were often outbreaks of chicken pox in households in which someone had shingles. In 1953, the offending virus was finally isolated.

Both shingles and chicken pox are down to a type of herpes virus called varicella zoster. This is quite different from other types of herpes (simplex) that cause cold sores and other nastier outbreaks down below.

Chicken pox is an even more common illness due to its contagious nature and is mostly experienced mildly during childhood. To get it over and done with, parents would even hold chicken pox parties.

The spots from chicken pox don’t follow the same pattern as shingles in that they can appear over the whole body, even in the mouth if it’s a bad case. These spots fill with fluid and then blister and finally scab over, the whole process taking one to two weeks.

For two days prior to the spots appearing and then until the blisters are scabbed over, chicken pox is in its contagious stage. One might feel a bit feverish and achy but it is generally mild and doesn’t need any treatment, the exception being pregnant women, new-born babies and those with compromised immune systems.

Avoid using ibuprofen for patients with chicken pox as this can cause serious skin infection.

Once you have chicken pox, the virus stays with you. That is where Bright’s finding comes into play again. It sits dormant in the spinal ganglia (a bit like checkpoints for the nerves coming out of each level of the spine before they branch off further).

Years or more likely decades afterwards, perhaps when a person is run down or unwell, the virus will reactivate.

It is at that point one experiences tingling or even burning discomfort over the area of skin that the ganglia supplies. Then the blisters appear.

The tendency of shingles to follow this pattern gave rise to its name. Herpes is from the Greek “to creep” and zoster means belt or girdle, tenuously mirroring the appearance of shingles at the waist. If we switch to Latin, cingulus also means girdle, hence shingles.

Contrary to pre-1950 attitudes, shingles can actually be quite dangerous. It is far more unpleasant than a bout of chicken pox and of the roughly 50,000 cases a year in England and Wales in those aged over 70, about 50 people die.

If you are unlucky enough for it to develop in the nerves around your eye or your ear (sometimes causing facial droop) then your hearing and sight are potentially at risk so it is important to flag this to your doctor.

Unlike chicken pox, shingles is worth treating with an antiviral medication called aciclovir, which is most effective if given within three days.

The idea of the medication is to halt the development of more blisters and potentially lessen the severity of the outbreak.

Unfortunately, pain can often be a real issue and is that typical neuropathic (nerve related) pain that paracetamol and the like probably won’t fully cover. You can try some cool compresses and loose fitting clothing.

Although often mild, for more painful episodes certain medications such as amitriptyline or gabapentin, good for nerve pain, can be used, so ask your doctor about these.

Occasionally, long after the rash has gone, one might experience unpleasant pain in that region known as post-herpetic neuralgia which can be recurrent and long term. These adverse symptoms tend to be much more common in older age groups but fortunately, in a world of vaccines, there’s one for shingles too.

The shingles vaccine is a weakened herpes zoster virus. Very rarely (one person in 10,000) develops a chicken pox like illness after having it.

Even if you have already had shingles, it might be worth having the vaccine as, if you’ve been dealt a bad card, you can get shingles a second time.

The vaccine reduces both your risk of developing shingles and the severity of the illness if you do get it and you only need it once, unlike some others we know and love.

People often ask what or whom they need to avoid if they have shingles. For a start, you can’t catch shingles from someone with it.

Likewise it is best if you have shingles to stay away from those with immunocompromise and new-born babies.

If you remember these rules, you won’t go far wrong.