TV actor who became a campaigner for his beloved village 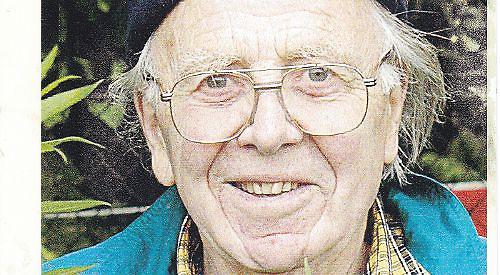 Binfield Heath through and through, he and his family lived in the village for more than five decades.

Len was born in South Wales in 1924, the younger son of Charles and Beatrice.

Charles was a coal miner and one of Len’s earliest memories was sliding down the steep slope that ran down from their house with his elder brother Gwyn.

In the Thirties, tired of mining, Charles decided to travel to London to look for other work.

Leaving Beatrice and the boys behind, he learned his trade as a skilled plasterer and, once established, the rest of the family followed, travelling by lorry squashed in with their possessions.

They settled in Crystal Palace, named after the huge iron and glass structure that housed the Great Exhibition of 1851. Late in life, Len still recalled the night in 1936 that the Crystal Palace caught fire and watching the great blaze that razed it to the ground.

Around this time Len’s father took him to his first match at Crystal Palace Football Club, resulting in Len’s lifelong support of the club.

When Len was 12, his father died of stomach cancer, leaving Beatrice to bring up the two boys on a shoestring.

Although they had few means, one of the things Len liked to remember from this time was going to the local library. He loved reading and used not just his own library card but also his mother’s and his brother’s to borrow as many books as he could at once.

Academically gifted and studious, he won a scholarship to Selhurst Grammar.

Len decided he wanted to become a journalist and his first job was as a trainee reporter for the Associated Press of America in Fleet Street.

In 1942, aged 18, he joined the Royal Air Force. The intensive training meant that he found himself flying solo after just 12 hours.

He qualified as a flying officer, despite discovering later that the RAF didn’t think he was “officer material”.

Having learned in a Tiger Moth, he went on to fly Hurricanes, Spitfires and even Dakotas. He trained in England and South Africa and served in Egypt, India, Ceylon, Malaya, Sumatra, Singapore and Java.

On his return to England in 1947 Len took up his previous profession as a journalist, this time with a south London suburban paper.

But gradually he realised the theatre was where he wanted to be. His wish was not only to act but to be a playwright too.

In the Fifties he started as a stage manager in repertory. As small parts on stage gradually came his way, his career began to take off and it wasn’t long before he was performing all over England.

Under the pseudonym Lane Meddick, TV and film work followed. His list of credits grew to include family favourites like Sunday Night Theatre, The Army Game, Coronation Street, Hancock, Steptoe and Son, Father Dear Father and Dixon of Dock Green.

Closer to home, he was Mr Mace, the friendly face of the local grocers in a series of television adverts.

Alongside acting, he wrote plays for the theatre and TV and a good few scripts.

In the mid-Fifties Len met Johanna. Austrian by birth, she was working her way through Europe and aiming to get to Canada.

Len used to see her regularly waiting for the number 3 bus to central London. One day he engineered a discussion about directions to somewhere and six months later they were honeymooning on the south coast.

Len and Johanna loved the country and in 1964 the family moved to a house in Binfield Heath with a wonderful garden and orchard. It turned out that part of the house had once been the village schoolroom.

Being an actor with no regular hours, Len was a very hands-on dad, taking the children to local shows and making them laugh with countless stories.

At this time he also wrote tales of boys-own military adventures for DC magazines and the Eagle comic, which were duly illustrated for their thousands of readers.

But acting is a precarious profession and, after some 25 years, Len knew that to ensure there was enough regular income he had to look for extra work.

He turned to selling insurance and pensions for Hill Samuel and became a successful investment adviser.

He made a lasting impression on his colleagues, who still remember his “ready sense of humour” and recalled him as “a great character, who had us all in stitches”.

Len and Johanna were married for more than 30 years. Sadly, Johanna died in 1988 but Len decided to stay on in Binfield Heath, where he wanted to live for the rest of his life.

He was passionate about the village and what he saw as the rights of the people who lived there. He served on Shiplake Parish Council in the Nineties and then on the Binfield Heath Village Society committee.

Len later worked tirelessly to establish Binfield Heath as a parish in its own right. He was determined that the village should enjoy its own identity rather than be split between Dunsden and Shiplake.

A dedicated taskmaster, he would dispatch those working with him on the new parish to the dusty archives of the Oxford Records Office to search out local history.

He drove round Oxfordshire, lobbying councillors for support, and canvassed house to house in the village. He researched the history of the enclosure acts and the origin of local footpaths, examined land ownership and changes and worked through council debates and decisions, writing it all up on an old word processor.

The fruits of this labour came in the clear outcome of the local referendum: a new civil parish inaugurated in 2003, incorporating the whole of Binfield Heath and the hamlet of Crowsley.

Len had wit and warmth and he continued to tell stories long into his later life... resourceful, kind and generous, like many performers, he would invariably light up a dull day.

For many years, he was Father Christmas at the village’s annual festive carol singing.

He also loved the Binfield Heath playground and was a determined defender of this much-loved asset.

His balanced view of risk and play, together with his willingness to take on the practical, hard work of regular maintenance, are among the reasons it is still going strong.

To Councillor George Englefield he was “a leading light, regularly mending picnic tables and the cabin slide”.

When Len reached 85, George’s hardest task was to tell him that he was no longer insurable on the committee and had to stand down.

In 2010 Len was diagnosed with Parkinson’s and subsequently Parkinson’s-related dementia.

His resourcefulness found a way of working round some of the many problems Parkinson’s presented him with and, despite the deterioration in his health, he sought to communicate to the end.

In his last few months his bed was positioned so that he could be cared for at home and have a view of his beloved garden, his favourite outside space.

Len will long be remembered by his family, friends and the many people whose lives he lit up in Binfield Heath and elsewhere.

His funeral was held at Reading Crematorium on January 27 followed by a reception at Eye and Dunsden village hall and attended by some 50 people.

If desired, donations in memory of Len can be made to the Open Spaces Society or the Royal Berks Charity at www.abwalker.co.uk