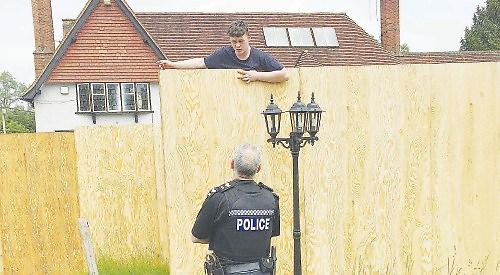 TRAVELLERS broke into a former restaurant which is due to be redeveloped and pulled pipes off the walls and threw radiators off the roof.

The group forced their way through the gate in the protective boarding outside the Nakhon Thai on the A4074 Reading Road in Cane End on Sunday.

They then barricaded the gate with a van and trashed the empty building, stripping away copper and lead and ripping out radiators and kitchen appliances.

Police were called after residents spotted people on the roof of the building, with some claiming they saw large items being thown off on to the ground below.

The site is boarded off as developer JPP Land, of Wargrave, has been granted permission to demolish the property and build six new homes. Police were called to the site on Monday, when the travellers refused to move but spoke to officers through a hole in the gate.

Younger members of the group sat on top of the barricade to relay messages.

The intruders were finally evicted at about 4pm.

The developer’s representatives have since visited the site to assess the damage and installed large concrete blocks at the entrance to stop vehicles being able to enter.

Chris Peters, the firm’s land and project manager, said: “On Sunday we received a call from a number of locals and police informing us that travellers had broken in and moved on to the site.

“They trashed the building, removed all the radiators, some lead from the roof, the kitchen appliances and copper from the pipes and cables.

“Once we were certain the site was clear we replaced the chain and lock on the gate and put concrete blocks in front of both entrances to secure the site.”

A Thames Valley Police spokesman said there had been “an unauthorised encampment” at the site but the intruders had now left.

Plans to redevelop of the site were approved by South Oxfordshire District Council in April.

The development will include four detached and two semi-detached houses, all with vehicular access from the main road.

The developer said that despite the restaurant being marketed, no one had expressed an interest in taking it over.

The restaurant closed in late 2016. It was originally a pub called the Fox Inn, run by Punch Taverns.

It then became a number of different restaurants, all of which were unsuccessful.

Before becoming the Nakhon Thai, it was known as the Palm Tree, which served Indian food.

Simon Kitson, planning officer at the district council, said: “Due to the scale of the site and the small size of Cane End, a successful business would arguably be heavily reliant on passing trade/customers from outside the settlement and its intrinsic local value is questionable as there are no other mutually dependent businesses in the vicinity.

“Given the generally broad support for redevelopment as expressed by the parish council and the local community, officers are satisfied that the existing business is unlikely to be fundamental to the quality and convenience of day-to-day life in the settlement.”