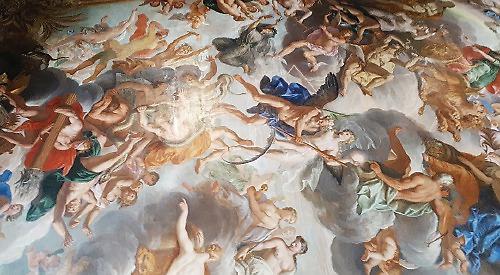 IN the third week of May nearly 40 members and friends of the society went to the Peak District for their annual mini-holiday.

John and Linda Dudley had organised everything, including an excellent hotel near Breadsell on the outskirts of Derby.

On the way up we stopped off in Leicester to visit the King Richard III Museum and Visitor Centre and Leicester Cathedral. This was an excellent and informative visit.

The stories of the Wars of the Roses and how the remains of the king were found beneath a local car park were intriguing and well worth the visit.

If ever the remains of Henry I are found beneath the ruins of Reading Abbey the scope for a similar exhibition is considerable.

The second day was spent visiting Chatsworth House, the home of the Duke and Duchess of Devonshire and one of the grandest and most visited country houses in England.

The house, the gardens and the knowledgeable guides made this a highlight of the week.

That evening a number of the group went to see a modern production of Graham Greene’s Brighton Rock. Reactions to this controversial production were, to say the least, mixed!

In complete contrast, the next day we visited the interesting and nostalgic National Tramway Museum in Crich, where we were able to see a variety of trams, some being repaired, as well as travelling on them through some of England’s industrial past.

In the afternoon we went to the village of Eyam and visited the church and museum.

Eyam was struck by the Great Plague of 1665-6. The local tailor had ordered some cloth from London but when it arrived damp and was placed in front of a fire to dry out, the infested fleas from black rats escaped.

As more and more villagers were suddenly taken ill, the realisation that the plague had arrived led the clergy to quarantine the village to avoid the plague spreading.

Remarkably, they were successful, although about one fifth of the villagers did succumb.

Our return to Derby took us through the beautiful, unspoilt, sparsely populated and dramatic countryside of the Peak District.

Interestingly, the further north we went, the predominant view was of sheep and some cattle. There seemed to be little, if any, arable farming.

On the Thursday we visited the World of Wedgwood, near Stoke-on-Trent.

This was the factory producing Wedgwood’s world famous china and an excellent museum.

Both were interesting in their own right. We learnt that between seven and 12 per cent of crockery is damaged on any one day so it is given to Highways England to help fill potholes in our roads.

In the afternoon we visited Sudbury Hall, a lovely 17th century manor house owned by the National Trust. It houses the Museum of Childhood, displaying toys, games and books through the ages. Enjoyable and nostalgic.

As we made our way back to Caversham on the Friday we stopped off briefly to visit the Royal Crown Derby Exhibition.

We then headed to Nottingham and the River Trent where we boarded the Nottingham Princess for an enjoyable river cruise with a roast lunch.

Reflecting on the week, what struck members (apart from the largely unspoilt countryside) was the excellence of so many of the museums and displays contrasting with the dereliction and wasteland of deserted factories of our once great industrial heritage.

The holiday was helped by the glorious weather and the convivial company.

Next year’s mini-holiday is being planned for Kent, the Garden of England, during May.

The society meets fortnightly on a Wednesday in the hall attached to Caversham Heights Methodist Church. Meetings begin at 8pm following a period for coffee and a chat.

There are also occasional visits to different places within a reasonable range of Caversham.