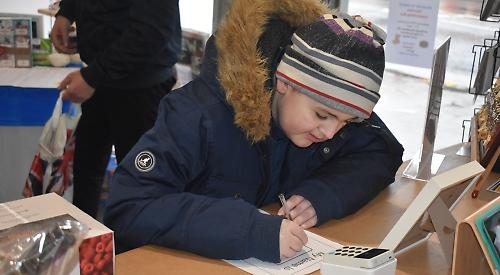 A CRAFT shop in Caversham held a fundraising day for a boy battling cancer for the third time.

There was also a tombola and raffle with prizes including chocolates, mugs, toiletries and wine as well as a “guess the name of the bear” competition. The event was in aid of 12-year-old Charlie Ilsley, of Buckingham Drive, Emmer Green, who has been undergoing treatment on and off since he was first diagnosed in 2015 and was given the all-clear twice only for the disease to return in November.

Charlie visited the shop with his mother Toni and the fundraising was continuing this week.

The pop-up shop, which opened in September, was launched by Kellie Henderson and Elisa Lionetti with the aim of providing the community with a wide range of unique, handcrafted products made by local people.

Mrs Henderson thanked everyone who attended on Saturday.

She said: “We have raised money for different charities and I wanted to do something more local.

“I’ve got 12-year-old twins so I wanted to do anything I could to help. It was lovely having Charlie here — it really made a difference. For 50p cakes, I think the amount we raised was a great achievement. It would have been a lot better had the weather not been so bad.”

Mrs Ilsley said: “It was really nice of Kellie to do this. My neighbour Janice Judd made quiches and scones and I went to Waitrose and bought a chocolate cake and a Victoria sponge and when I got there there were loads already.”