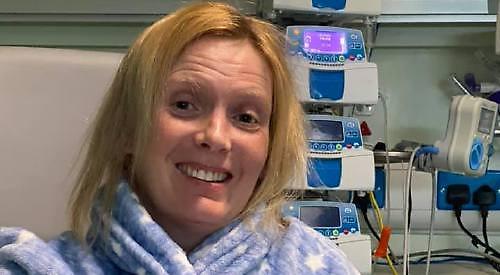 A WOMAN who was seriously injured in a riding accident has been reunited with her horse after spending almost a month in a coma.

Paramedics feared Anna Tomson would not survive after being crushed beneath Berry on a bridleway off Deadmans Lane, near Goring Heath, on May 17.

She suffered multiple internal injuries when the four-year-old reared up and toppled backwards after being spooked by a group of off-road motorcyclists who roared out of the woods a short distance behind them.

It took about four hours’ emergency treatment at the scene before she could safely be taken to hospital, where she underwent several operations and spent 28 days on a ventilator while heavily sedated to aid her recovery.

She was discharged on Monday last week and taken to visit Berry, who is stabled at Cane End, for the first time since the accident on Sunday.

The pair could only spend a few minutes together as Miss Tomson tires easily but she will return regularly and has vowed to get back in the saddle as soon as possible.

Sarah Peters, a friend who runs the stables and was on the scene shortly after the accident, said it was an emotional moment.

She said: “At first Berry was looking at Anna as if to say, ‘I’m not sure about this — are you okay?’

“It must have been hard because the last time they were together, Berry was nudging her to get up and she wasn’t moving.

“Then she perked up, almost like ‘oh, it’s really you’, and started grooming her hair and everything.

“They weren’t together for very long because Anna still gets tired easily but it really cheered her up because she’s still in the early stages of recovery and learning about what happened.

“She has no memory apart from the accident itself and being found by two passers-by. After that, she only remembers coming round in hospital several weeks later.”

Miss Tomson, a British event rider and commercial analyst to the catering sector, was ferried to an ambulance by specialist rescuers then driven to the John Radcliffe Hospital in Oxford.

It was originally hoped that she would come round within a week of the accident but she had to stay longer because of unforeseen complications.

At one point she had to have an air tube installed through a temporary opening in her throat as her injuries, which included broken ribs, made breathing difficult.

After several trial periods without a ventilator, she came off it for good on June 15 and was transferred to the Royal Berkshire Hospital in Reading, which released her after a week. Miss Tomson is now being cared for by her family at her home in Upper Woodcote Road, Caversham, and can walk and talk for short periods.

She undergoes daily physiotherapy on an exercise bike to build up her strength and stamina and doctors expect her to recover her full fitness in about a year.

Miss Peters said: “The outlook is very positive but it will be slow progress as she builds up her core strength again.

“She is still adjusting to what happened and, as is normal for people who’ve been in intensive care, sometimes she can be fine and other times she’ll be a bit tearful.

“She has said the one goal she won’t falter from, no matter what, is getting back on her horse and competing at events again. That’s what all her efforts are being channelled into and is keeping her going.

“Realistically that won’t happen until February or March next year, although she’s very determined so I suppose it could be sooner. She is using the exercise bike religiously, no matter how tired she gets.

“It's very frustrating that she can’t do some things she used to be able to do but it’s bound to take some time because of all the damage.

“Everyone is so happy that she’s going to be okay. I’ve been in touch with a paramedic who was there and she said they didn’t expect her to make it out of the woods, so it’s pretty incredible to have her up and talking. I can’t explain how wonderful it feels.”

While her friend was in a coma, Miss Peters launched an appeal to help meet her living costs, which raised £13,305.

Many donations came from strangers after news of the incident spread through the equestrian world.

Miss Peters said: “She was completely overwhelmed to learn how much support she has received — she had tears rolling down her face when I showed her and she didn’t know what to say but she’s very grateful.

“It really hit home because people thought ‘it could have been me’. It’s also really inspirational for people to see that you can come so close to death and still have the determination to carry on.”

Two men, both 22, one from Earley and another from Woodley, were arrested in connection with the incident.

The investigation is continuing and anyone with information should call Thames Valley Police on 101.