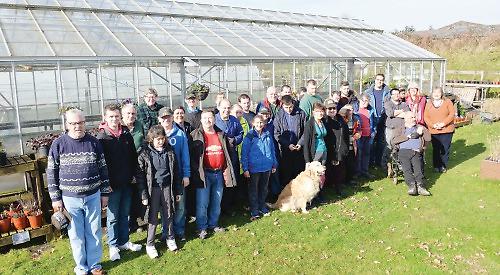 A CHARITY which supports disabled adults is preparing to celebrate its half century.

The Ways and Means Trust, which is based at Manor Farm in Peppard, will reach its 50th anniversary in February next year.

In the run-up to the occasion, there will be a series of events including a 50 holes for 50 years golf day at Caversham Heath Golf Club.

Twelve players will take part, starting at 5am on June 23, the longest day of the year.

On Saturdays between May 6 and June 3, the charity’s base at Manor Farm will be open to the public from 9am to 4pm.

Frances Hill, the charity’s chief executive, said: “We want more people to come through the door. People think it’s private and we don’t want to be interrupted but we’re open and people should come and see what this community charity does.”

The charity will continue to run a stall at Sonning Common WI’s monthly coffee mornings and volunteers will be at the fun dog show at Caversham Court Gardens on June 25.

Ms Hill said: “Each week we work with more than 60 disabled adults with either a learning, physical or mental disability. Most people have more than one.

“It can take some people years and others are so far from the employment market that it helps to keep them motivated and give them a reason to get out of bed in the morning.”

The charity was founded by Dr David Duncan, a consultant psychiatrist at the former Borocourt Hospital near Peppard, to help the rehabilitation of patients with mental health issues.

It was originally based at Huntley and Palmers in Reading before moving to Caversham in the Seventies. It opened Greenshoots, the horticultural therapy unit at Manor Farm, in 1997.

The whole charity, which also has a packaging operation, a cleaning company and a canteen teaching unit, was moved to its current home in 2014.