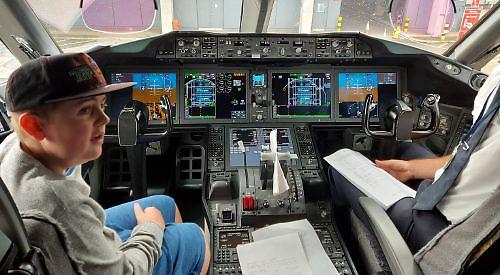 A BOY said to have only months to live has begun cancer treatment in Mexico in the hope of saving his life.

Charlie Ilsley, 13, of Buckingham Drive, Emmer Green, is fighting the disease for the third time since he was first diagnosed with a brain tumour in 2015. He now has tumours on his spine.

He flew to Mexico City last week with his parents Mark and Toni to begin a new form of immunotherapy treatment which has proved successful in eradicating the disease in mice.

The treatment will last three weeks and costs £25,000, which has been raised by the public and supporters.

Charlie, who currently has no symptoms, had the chance to visit the cockpit of the plane before the 11-hour flight from Heathrow.

The family did some sightseeing over the weekend before Charlie’s treatment began on Monday.

He is having CAR-T cell treatment under the supervision of Dr Jason Williams, director of interventional oncology and immunotherapy at the Williams Cancer Institute, which also has branches in America and China.

Speaking from Mexico, Mrs Ilsley said: “Charlie had his first infusion through his port and it all went really smoothly. Dr Williams said he’s very positive for Charlie.

“I’m scared but we have to do this. Charlie is worth all the anxiety in the world.”

She added: “We arrived in Mexico in style, very spoilt by the airline. We had our own bed each, which was lovely. We had a few days to look around but covid is bad here so we had a private tour of the pyramids. Charlie bought a necklace of a river god and he’s petrified because we had a storm and it has been raining ever since.”

She thanked Claire Brown, from Cheltenham, who led the online fundraising drive, saying she was the “most caring soul” she had ever met.

She added: “Thank you to all the Stand Up To Cancer Charlie’s page followers and supporters and all those Charlie’s Angels that support the raffles and have donated to help save Charlie.”

Since then they have been searching for a new trial treatment. They were told Charlie was ineligible for trials at hospitals in both Memphis and Seattle and not suitable for trials in Philadelphia.

But in November they were told the disease had returned after a lumbar puncture showed cancer cells in his spinal fluid. A scan in March showed the disease in his spine and elsewhere. Charlie had been receiving the drug etoposide through a reservoir inserted under his scalp in January and topotecan but these treatments have ceased as they weren’t working.

After his diagnosis in 2015, Charlie underwent a 10-hour operation and had 31 sessions of radiotherapy followed by chemotherapy before being given the all-clear in March 2016. Then in spring 2018 two tumours were discovered on his spine.

Meanwhile, singer-songwriter Jim Duncan has raised more than £3,000 for Charlie’s treatment with a 24 hour live performance.