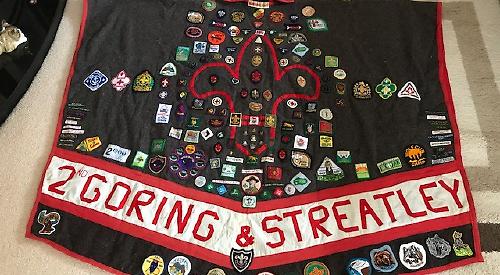 A SCOUT leader raised more than £7,000 for the movement by selling his collection of memorabilia.

David Cooksley, who is group master for the 2nd Goring and Streatley group, has spent the past three months sorting through the badges, medals and other regalia he was storing at his home off Gatehampton Road, Goring.

He then sold them on eBay in aid of the British Boy Scouts, to which his group is affiliated.

The organisation claims to be closer to Lord Baden-Powell’s vision when he launched the Boy Scouts in 1910 and is separate from the larger Scout Association, which also operates in the village.

Mr Cooksley, 76, who is known to his charges as “Skip”, had built up about 400 items over many years but never had time to look through them.

He bought a few at antiques shops but most were gifts from parents or friends. They were stored in three large boxes in his loft so when the coronavirus lockdown was announced, he decided to find them a new home while raising money.

The highest sum was paid for a badge which commemorated an auxiliary camp for the 1929 world jamboree, which fetched £264. A badge for the jamboree itself went for £91.

Other items included two Girls’ Life Guard Brigade flags and a Boys’ Brigade badge, the latter of which fetched £175. Another dated back to 1916, when Baden-Powell founded the Wolf Cubs.

There was a small number of duplicates which Mr Cooksley kept to frame for his group’s collection.

He also sold some old family belongings, including a 1917 railway service medal, which went for £20, and an old mug belonging to the Great Western Railway workmen’s gang, which fetched £70.

Mr Cooksley said: “People would often give me scouting badges, saying they might be of interest, so I haven’t so much ‘collected’ as accumulated them.

“I knew some people were very keen on collecting scout badges and others had gone for a lot of money but I was still shocked to see what people were willing to pay.

“Some collectors bought multiple items whereas others were just buying one or two. One badge went for £50 even though about a quarter of it had been eaten by moths. Some buyers were very happy because they’d managed to virtually complete their collections.”

He still has two camp fire blankets filled with scouting badges from his own career, which started when he was growing up in Goring, and says he won’t be selling these. Mr Cooksley said: “I can’t imagine how much they would fetch — it would probably be about £2,000 but I wouldn’t want to sell them.

“The others were of historic interest but they didn’t have that personal connection. I never really looked at them thoroughly but now many have gone to badge clubs who will exhibit them every so often.”

Mr Cooksley took over Goring’s scouts aged 17 in 1961 but, following a dispute about how the group was being run, he founded his own group in 1982.

He stepped down from frontline duties last year but has stayed on to help behind the scenes. The weekly meetings are now run by scout master Trevor “Stitchy” Ockwell and cub leader Karen Wade.

The group’s activities are currently on hold because of the pandemic, although members have met a number of times online.