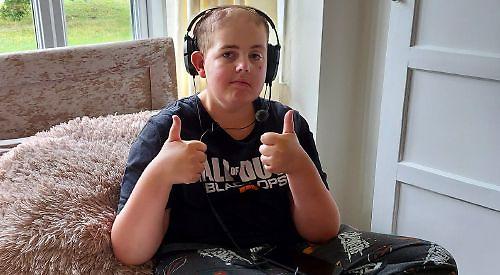 A WOMAN has given up work to be with her teenage son after it was found cancer has returned to his brain.

Charlie Ilsley, 13, was first diagnosed with a brain tumour in 2015 and has had various types of intensive treatment since then as the disease spread.

Now a scan has revealed a tiny tumour in his brain and he is to undergo a new form of immunotherapy in Mexico, where he has already had treatment.

His mother Toni will accompany him after giving up her job at the Day Lewis pharmacy in Sonning Common.

Mrs Ilsley, of Buckingham Drive, Emmer Green, said: “I just want to spend the rest of the time with Charlie and make sure I’m there for him 24/7. That’s my job now.

“We’re in a grim situation. This is the first time in five years he’s had one in his head. It is really worrying me because it causes major problems. The last thing I want in the world is for him to suffer. I said to him, ‘The scan has shown that the cancer has grown a tiny little bit’. He said to me, ‘I’m worried about my cancer growing’ and I said to him, ‘Don’t worry, it’s my job to worry’.

“It breaks your heart. No one deserves to go through what Charlie’s gone through and if I could have it instead of him, I would. I say that to him and he says that would be worse because there wouldn’t be anyone to look after him.

“I have to sit here and think about if he dies and how I’m going to cope without him. We have been together one-to-one for six years. He’s a massive part of my life and I love him to bits. We’ll just fight together.”

Mrs Ilsley and her husband Mark received the results of his latest scan last week, which showed the 1.5mm tumour in his cerebellum.

The only consolation was the doctors saying it had grown very slowly rather than aggressively.

Mrs Ilsley said: “The doctor is saying it’s progression now because of this new one that has popped up in his brain. We’re in the worst situation we have been in for five years.”

Charlie, a pupil at Highdown School in Emmer Green, currently has no symptoms and his mother says he eats and sleeps well and enjoys playing on his PlayStation with his friends online.

He flew back to Mexico yesterday with his parents for more immunotherapy, which will involve injecting two drugs directly into Charlie’s spine.

The family expect to have to raise at least another £25,000 for the treatment as that is what the previous immunotherapy cost.

Mrs Ilsley said: “We’ll go over there and see what happens. Going straight into the spine is a much more complex procedure but the side effects are zero. It is uncharted but the doctor said he’s used to that.

“If this isn’t going to work and I’m going to lose him, I want to make sure I’m with him all the time and he’s not going to suffer. I’ll never give up on him, he’s too precious.”

She thanked all of her son’s supporters who have helped raise thousands for his treatment, in particular Claire Brown, from Cheltenham, who has led the fund-
raising campaign.

“I just couldn’t do it without her,” said Mrs Ilsley. “She’s amazing. She walked into our lives a couple of years ago. Every day she has been relentlessly trying to raise money to keep this little boy alive.”

Following his diagnosis in 2015, Charlie underwent a 10-hour operation and had 31 sessions of radiotherapy followed by chemotherapy before being given the all- clear.

Then in spring 2018 two tumours were discovered on his spine. Charlie was given the all-clear for a second time in August last year after undergoing specialist radiation treatment in Turkey which his family had to raise the money to pay for.

• Tesco in Henley will be holding a fundraising day for Charlie’s treatment tomorrow (Saturday) and will have buckets for shoppers to make donations.