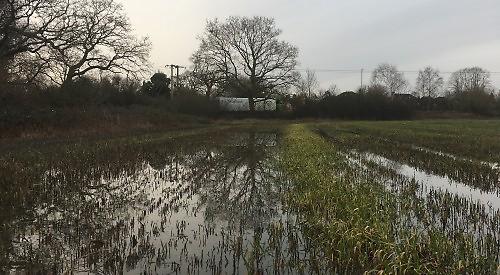 CHARVIL could be at a greater risk of flooding if plans to develop fields for housing are approved, say residents.

The planning authority had previously planned 85 homes for the site, which is owned by the University of Reading and has been used for animal grazing by Sonning Farm.

The council reduced the number following a public consultation in which more than 400 villagers responded.

Charvil has been highlighted as being a high flood risk by the Environment Agency and residents say this risk would be increased if the land is developed.

A temporary flood barrier was installed in Charvil Meadow Road by the agency in January and February 2014 and again in September 2019 following prolonged heavy rainfall, which resulted in the River Loddon bursting its banks.

Greg Elphick, who lives in Park View Drive North, said: “My neighbours and I are very concerned and have raised this subject with the borough council before.

“Where the old river joins the Loddon and the Thames has always been a hot spot for floods and these have become increasingly frequent over the years due to the climate emergency.

“The field that they want to develop is basically a massive sponge that soaks up all the excess water when it rains a lot or the banks burst.

“If this area is developed, it will be at risk of flooding. Not only that, but so will the surrounding areas as the water will have nowhere to go.”

Mr Elphick, a former police officer, also said there was not enough infrastructure in Charvil to be able to cope with hundreds of new residents.

He said: “You have to go to Twyford and Ruscombe or into Woodley for a GP. We have a Nisa [convenience store] but that doesn’t even have a post office anymore.

Mike Heath, who lives in East Park Farm Drive and is a member of Charvil Parish Council, said that flooding was likely to become more frequent anyway.

He said: “The main problem is
climate change. More rain will fall during the winter months which makes flooding a regular
occurrence.

“The borough is an area of serious water stress. If we build more houses, we need more water to supply those homes. Water is not an infinite source and we already need to import a surplus now to the Loddon as demonstrated in the council’s own 100-year plan.

“Infrastructure in the area will also need a lot of attention. There were more than 667 sewage overflow spills for a duration of 6,453 hours in 2020.

“This causes a danger to human health and the environment.

“Charvil’s flood risk is also going to affect house prices. People will not want to live here due to the risk of damage and, as a result, our properties will lose value.”

The borough council says its local plan focuses on the needs of communities in making them “sustainable, valuable, and enriching”.

Councillor Jane Hartley, who chairs its planning committee, said residents should expect some level of development but agreed it was important to measure it against local services.

She said: “I am a bit concerned that residents might not be being realistic about what choices there are. People can be very against something and instead of accepting development and managing it cohesively, there is a bit of an ‘us and them’ approach.

“We can’t say ‘No development’, but we can be clear about what the residents want in terms of what type of development and the dependent infrastructure required to make it work. We’ve got a problem with school places and traffic is another concern.”