Pub manager leaves after 30 years to go it alone 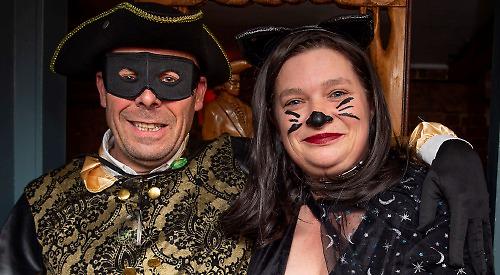 A WOMAN has taken over as manager at the pub in a hamlet less than two miles from where she grew up.

Lou Jackson, 50, is running the Highwayman Inn in Exlade Street, near Checkendon, with the help of her partner Tony Stow, 57, and her daughter, Poppy Evans, 19.

Her move comes after three decades working for chef Paul Clerehugh, who runs the Crooked Billet in nearby Stoke Row.

Ms Jackson, who grew up in Checkendon, said: “I worked with Paul for 30 years and I loved it but this opportunity came up and it would have been crazy not to take it.

“It has been great so far. I’ve had the most overwhelming support from regulars and old customers from the Crooked Billet coming to see me as well.

“I took over after a horrible situation and what happened meant that the previous chef left in the middle of the night but the pub still needed to be managed.

“I feel lucky because a lot of people in the area have come to support us despite so many saying we would have a hard time after what happened and that we would never be able to make it work.

“It was a big gamble but we knew people would want to come to a nice pub with good food and good hospitality and if we got that right we could make it work.

“We know that people want to feel welcome, they want homemade food and a fire.” Madalin Andrej, who has worked at the pub for 10 years, remains as head chef at the independent pub.

Ms Jackson, whose parents had a farm in Ipsden, attended Stoke Row Primary School and later went to agricultural college before working as a shepherdess for three years.

In 1991, she responded to an advert in the Henley Standard for a job as a part-time waitress at the Crooked Billet and was successful. She said: “At the time I had a student overdraft and was desperate to pay it off as soon as I could.

“I fell in love with the job and stayed for 30 years. You meet different people and every day is different. I’m a people person, that’s why I love this job so much.”

She worked her way up and became manager at the Crooked Billet and then spent five years working at the London Street Brasserie, Mr Clerehugh’s second award-winning restaurant in Reading.

Miss Evans said: “Running a pub with my mum has been really good so far.

“I’ve watched her working in this industry since I was a child and it’s nice to finally be able to help her and maybe one day I can run my own place.

“I love being around people and in the future I’d love to put together menus as I enjoy cooking too.”

Ms Jackson also has a son, Teddy, 14, who is in year 10 at Gillotts School in Henley.

In October 2019, Paul Burrows, a former executive chef at the pub who was living on the premises, was arrested following a police raid.

He was found to have downloaded more than 40,000 indecent images of children and animals.

In July this year he was sentenced to 20 months’ imprisonment, suspended for two years, and ordered to carry out 180 hours’ unpaid work and 40 days of rehabilitation work.

Staff at the pub said they knew nothing of his arrest or conviction until the week before he was sentenced when he suddenly left.

• A Halloween launch party was held at the pub on Sunday. To see pictures, turn to page 41.