Remains of camp where Poles resettled after war 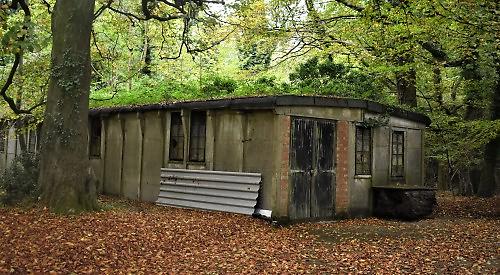 IN the Fifties, there was a cinema in the middle of a woodland in Checkendon... and a swimming pool, school, shop and chapel.

Now people come from all over the country to visit the remains of a resettlement camp where hundreds of people once lived.

After the Second World War, Checkendon was home to Polish war refugees. There were 228,000 Polish troops in the British army and many were displaced after the conflict, ending up living in huts surrounding the woods and common land at Checkendon as well as at Nettlebed and Kingwood Common.

From 1946, they could join the Polish Resettlement Corps, a unit of the army set up to help them prepare for civilian life in Britain.

They were housed in former military camps and support was provided under the Polish Resettlement Act, including dedicated schooling for children and training of adults for civilian jobs.

The camp at Checkendon, located at the outskirts of the village, was opened in 1948 and offered accommodation in small buildings known as Nissen huts.

Invented by Major Peter Nissen, these were semi-cylindrical and made from corrugated steel so were easy and cheap to build. They were used extensively around the area during the war.

Most of these buildings have been dismantled or become derelict but some still survive, scattered through the woods.

Carol Cox, whose family has owned timber supplier Norman Cox in Checkendon for 30 years, uses some of the huts that have been in her yard for decades for storage.

In the past, she has restored them in order to welcome visitors interested in their history.

Ms Cox, 58, said: “We get a lot of people coming in and saying they’d love to have a look around as they used to live here or their families did.

“When I was younger, there were a lot of Polish people who lived around here. It used to be like a town with a shop and a cinema. There must have been a lot of people living here at some point.

“We had a man who said his dad used to drive a bus that took people from here to Reading. We also have a sort of brick building in our yard and I’ve had people say they used to swim in there.

“Over the years, we have had hundreds of people coming to see the huts and I initially took their names and numbers but we had so many I had to stop.”

The camp, which had been an American base during the war, also had a chapel and a morgue, the remains of which can still be found in the woodland behind Ms Cox’s business, just off Bernis Hill.

By the Fifties, Checkendon had a bustling Polish camp, with its own priest as well as schools and entertainment based in the Nissen huts.

Children were taught their mother tongue and about Polish history.

There was a library stocked with both Polish and English books, a youth club and table tennis and chess groups.

An amateur dramatics group put on plays, a choir sang both Polish and English songs and there was a traditional Polish dance group.

A six-person dance band played regularly at dances held in the camp’s entertainment hall and weekly film shows were held there too.

Ms Cox said: “The morgue was later used as a games and shooting hut but it was very cold, of course, as it would have been for its initial use.

“It’s quite fascinating and it must not be forgotten — it’s quite a big part of history and it’s amazing to look at the huts and get a feeling for how they lived.”

Many villagers have memories of the camp, in particular going to see films being shown in the cinema hut.

The nearby Black Horse pub is still owned by the same family that served Polish settlers.

Richard Textor, 58, who has lived in the village all his life and whose aunt used to manage the pub, has been collecting war memorabilia and studying the village’s history for the past 30 years.

During the Second World War, the government-in-exile of occupied Poland was based in London and many Poles fought alongside the Allies.

Following the Yalta conference in February 1945, the frontiers of Poland were redrawn and the Soviet Union installed a puppet communist government. Many Polish servicemen decided not to return.

The Polish Resettlement Act was the first ever mass immigration legislation of the UK parliament and offered British citizenship to more than 200,000 displaced Polish troops on British soil who had fought against Nazi Germany and opposed the Soviet takeover of their homeland. The Act also supplied a labour force to the demands of war-torn Britain.

Mr Textor’s father, Waldemar Daniel Textor, was in the Polish Army and came to the UK as a war refugee after Poland was taken over by the Soviets.

He was born in 1915 in Zbiejewek, Przedecz, and worked as a farmer on the family farm. He was called up from the Polish army reserve in August 1939, just a few weeks before the Germans invaded Poland.

He served in the 14th Infantry Division, part of Army Poznan and took part in the battle of Bzura, where the regiment broke the German lines, causing them to retreat.

“The surviving soldiers tried to cross the Bzura river and reach the Kampinos Forest but without success. Only a few soldiers managed to do so and hid in the forest and then broke through to Warsaw and fought until capitulation.

“My father later joined the Polish forces under General Anders in Italy where he served in the 10th Wolynski Rifle Battalion, 5th Kresowa Infantry Division.

“He took part in various battles, including crossing the river Senio and the battle of Bologna and Lombardy Plain.

“While trying to recover a wounded Polish soldier he was wounded, too, and received a medal in recognition of this.

“He continued to serve in Italy after the war until 1946. He was a guard and interpreter on the troop trains taking enemy prisoners back to Germany.

“He left Italy and travelled to England on the troop ship Enterprise. He joined the Polish resettlement corps in England in December 1946 and was discharged in October 1948.”

Waldemar worked on the farm at the Black Horse, which was owned by Albert and Maggie Saunders. He was part of a strong community of Polish people who lived in and around the camp. Mr Textor said: “He had been granted permission to emigrate to Canada and join his brother Alec, who had been there since 1928, but Mr Saunders had become very ill and he decided to stay at the Black Horse looking after the farm. He worked there until he retired.”

While working at the farm, Mr Textor snr met his future wife Rose Stallwood, who was Mrs Saunders’s sister.

They were married in St John’s Church in Stoke Row in January 1953 and went on to have two sons, John and Richard.

Mr Textor said: “It’s important to document it because as the people who remember it first-hand die, it gets forgotten.

“So many people sacrificed so much that it can’t be forgotten — we have to remember our history so that the same mistakes are not made again.”

The glass windows and altar from the chapel at the Checkendon camp were recently transferred to Sacred Heart Church, the Polish church in Watlington Street, Reading, where people can learn about their history.

Przemyslaw Swiderek, 35, started studying the Checkendon camp when he moved to the area three years ago. He said: “I’m really into Polish history and I realised that so many Poles used to live in this area after the war.

“For a long time I thought they were mainly based in the London area so I was very surprised when I found out about it.

“I had no idea there were so many war refugees from Poland and that they were so organised as a community and had so much going on.

“Not only were they living here but they also had associations and they were a real community. They raised their families here and it was a very big community and more cohesive than the Polish community that started after more people moved here in the early 2000s.

“With the new generations, we were never able to build that strong community between us and I think it’s because back then people used to socialise more.”