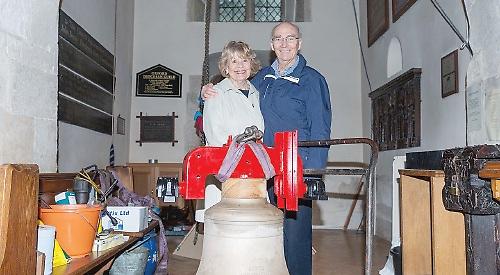 A SIXTH bell has been added to Turville church after a parishioner paid for it as a gift to his wife.

Mike Spracklen also made the purchase so he and fellow members of the bell-ringing band at St Mary the Virgin could ring out more complex patterns.

The 152kg steel bell, which was cast at the Royal Eijsbouts foundry at Asten in Holland, is engraved with Annie’s full name while the foundry’s name and year of manufacture are inscribed in Latin around the top.

A team of specialist contractors took four days to install it. They hoisted the bell through a trapdoor directly beneath the bell tower using a pulley system and then mounted it in a metal frame.

The church originally had three bells but a fourth and fifth were added in 1996. At the time, space was left for a sixth in order to form a complete musical scale.

The new bell was dedicated at a special service led by Rev Sue Morton, associate priest for the Hambleden Valley.

She climbed the ladder to the top of the tower and blessed the bell before children from St Mary’s youth groups gave Bible readings.

The congregation sang hymns including Praise My Soul, The King of Heaven, Lord Of All Hopefulness and Give Me Joy In My Heart, the last of which featured an extra verse written specially for the occasion.

He had been a bell-ringer as a boy and returned to it at the suggestion of his wife, 77, after retiring.

The couple, who live in Marlow, have known each other since 1958 and were married in 1963. Mr Spracklen soon learned that the church wanted an extra bell and said purchasing it was an opportunity to thank his wife for supporting him throughout his career.

Earlier this year, the couple visited Bridport in Dorset to watch it arriving by boat and to see it being tuned.

They attended both the installation and the dedication service.

Mr Spracklen said: “When I reached the age of 15, my sport took me away from bell-ringing and I never got back into it because I was so busy and we spent a lot of time travelling all over the world.

“Annie encouraged me to find a new interest when I retired and I got involved with St Mary’s when I found out they were putting a band together. I wanted to help in whatever way I could and it all went from there.

“We watched the bell being hoisted up, although we weren’t athletic enough to climb the ladder and see it being fixed in place. It was very exciting and quite emotional when the work finished.

“The service was absolutely wonderful and the band is progressing well. It will take them some time to get up to standard but the extra bell should attract more experienced ringers who can help them.”

Mrs Spracklen said: “It was a very moving gesture — how many people can say they have a bell dedicated to them? It’s pretty special and a lovely thing to have done.”

Rev Morton said: “We thought it was a wonderful suggestion from the outset and were very thankful for Mike’s generosity. There was a wonderful atmosphere at the service and it was an incredibly joyous, uplifting occasion.

“Mike and Annie are a wonderful couple and it has been a pleasure getting to know them better.

“The new bells will be enjoyed by the people of Turville for many years to come as well as our many visitors who come to get married here.”