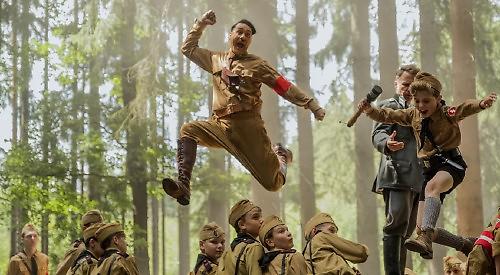 FOR the rest of the world, Adolf Hitler was a monster, but for a time in the Forties he was the closest thing to a rock star in Germany, where he charmed a whole generation into accepting his politics of hate.

Jojo Rabbit, Taika Waititi’s ingenious left-field wartime satire, is an unusual but effective attempt to make sure it never happens again — not with a solemn history lesson but by trying to understand the propaganda and brainwashing that can lead otherwise good people down a dark path.

The opening title sequence makes this clear, brilliantly spoofing the Führer’s cult of personality by presenting images of Hitler pressing the flesh at political rallies while The Beatles — who later made it big in the Fatherland too — sing I Want to Hold Your Hand in German.

Although it deals with perhaps the greatest horror of the 20th century, the rise of fascism under Adolf Hitler and the death and destruction it wreaked, Waititi’s film is rooted in hope.

It never shies away from the realities of war, yet it could be a companion piece to the writer-director’s last but one film, 2016’s quiet, thoughtful Hunt for the Wilderpeople — an altogether different coming of age story.

At 10 years old, Johannes “Jojo” Betzler (Roman Griffin Davis) is convinced that he is destined to serve his country at the highest level. He’s finally about to join the Hitler Youth and he can’t wait.

He’s encouraged in this ambition by his imaginary friend, Adolf Hitler himself (played by Waititi).

However, Jojo isn’t quite the soldier he thinks, and after suffering a humiliating near-fatal injury at the camp, he is forced to conclude that he may not be up to it. At the same time he makes a surprising discovery at home: a young Jewish girl called Elsa (Thomasin McKenzie), who seems to live in the walls.

Jojo is at first minded to report her to the authorities. But instead the two form a friendship that forces Jojo to look anew at his idol Hitler and question his ideology.

Unusually for a film of this kind, Jojo Rabbit juggles comedy and drama right to the bittersweet end, knowing just when and where is the right time for laughter.

“It’s not a good time to be a Nazi,” Jojo’s Hitler Youth friend deadpans when the liberating Allies arrive in a hail of bombs and bullets.