Movie-mad boy who grew up to make a blockbuster 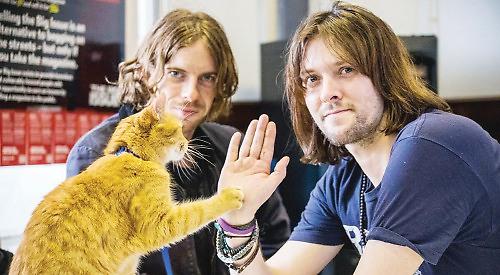 A FORMER Sonning schoolboy has told of his joy at producing a major film that earned him a meeting with royalty.

Adam Rolston, 32, is the man behind A Street Cat Named Bob, which opens at cinemas nationwide today (Friday).

The comedy drama is based on a book of the same name about a homeless man who overcomes his drug addiction with the help of a ginger cat called Bob.

Mr Rolston, whose mother runs the Mill at Sonning theatre, attended the premiere in London last night, where he met the Duchess of
Cambridge.

He said: “It’s a lifelong dream to see a film I was involved with in cinemas and being watched by audiences. It’s also quite surreal. I can’t turn my head when I’m out without seeing the film poster.”

The previously little-known producer has spent years working in films, having first developed an interest as a child when he moved to Sonning with his actress mother Sally Hughes.

They lived next door to illusionist Uri Geller and he went to Reading Blue Coat School in Sonning, where he thrived.

Mr Rolston recalled: “I was very lucky to go to such a great school. I had the chance to be part of the rugby team there, although I was also very much into art and English.”

His true passion was the creative arts — his father Mark Rolston is an American actor who was in The Shawshank Redemption and has appeared in dozens of TV shows.

Mr Rolston said: “I wanted to be an animator when I was younger as I really enjoyed drawing and it was my ambition for years but somewhere along the line I switched to scriptwriting.

“I watched a lot of movies as a child and was always going to the cinema. I was obsessed with movies.”

After school, he went to Brunel University to study English and creative writing before taking a masters’ degree in screenwriting at Royal Holloway. He sold his first script when he was 18 and that encouraged him to keep writing.

Much of his work was for the stage and included several comedies and a musical, A Sentimental Journey: The Story of Doris Day, which premiered at the Mill before touring in Europe and America.

Mr Rolston recalled: “I was trying to break into film and wrote rom-coms and stuff that could sell but I found it very hard to break into that world.

“I come from a creative family and grew up knowing a bit about the business and it definitely had an influence but it didn’t make it any easier.”

After failing to get several scripts produced, Mr Rolston raised £25,000 to make his own low-budget film, Meet Me on the Southbank, in 2013.

The story follows the burgeoning romance of a young couple and was filmed entirely in London in less than two weeks. He then founded his own company, Shooting Script Films, before stumbling on the idea for a film based A Street Cat Named Bob, one of three real-life stories written by homeless man James Bowen.

Mr Rolston said: “I had read the book when it first came out in 2012. It was a great story and really interesting.

“I also love animals. I grew up with cats and I also like stories about homelessness as there’s a romantic element. It’s a gritty subject but appealing.

“Later in 2012 there were lots of rumours that there would be a Hollywood film and I thought I would look forward to that. I then found out that the rights were still available and thought, ‘why has no one gone for this?’

“I didn’t fancy my chances of getting the rights as there was a lot of serious interest but I met James, Bob and Garry Jenkins, the ghostwriter of the book, and made a passionate pitch.

“Two weeks later I got the call saying that they wanted to go with me. I was thrown in at the deep end as I wasn’t known at all in the film industry.” Mr Rolston found a writer and most of 2014 was spent writing the script. He said: “We started trying to get the balance tight between the key story of friendship and the grittier story of recovering from addiction but in 2015 we weren’t getting that far as there were lots of rejections.”

The project finally took off when director Roger Spottiswoode, whose previous films include Turner and Hooch and Tomorrow Never Dies, agreed to direct the film.

They then found Treadaway, who had appeared at the National Theatre in The Curious Incident of the Dog in the Night-Time and won an Olivier award, while the part of Bob went to the cat himself. Mr Rolston said: “Roger is a Hollywood legend and a bit of a veteran. He loved the script and wanted to do another animal film after Turner and Hooch. He was a big factor in the film progressing.”

After a whirlwind trip to the Cannes Film Festival to secure funding, work on the film began later last year and Sony agreed a distribution deal.

Mr Rolston, who invited his mother to the premiere, said his new lifestyle is taking some getting used to.

“It’s been a bit of a journey, a huge learning curve for me,” said. “It’s exciting but also nerve-wracking.”

He will be back to work in the New Year to start on his next two films.

“There’s no rest for the wicked,” said Mr Rolston. “I’ve got my own company which has grown because of this.

“The first film is a romantic comedy called Never Google Heartbreak and then we are immediately going to Canada to film an American buddy comedy called Booze Bus.

“There’s even chat about a Bob sequel. My life has changed because of it and I feel very lucky to be involved with the story as it has opened so many doors.”