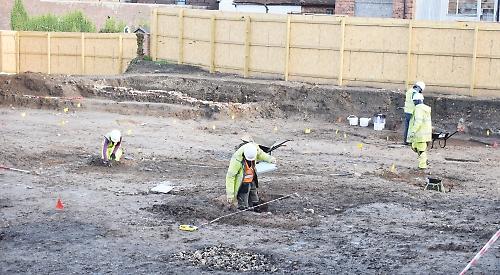 POTTERY dating back to the Roman era has been uncovered at the Market Place Mews development in Henley.

The fragment is among dozens of finds uncovered by archaeologists as the site is prepared for new shops and flats.

They include glassware, tobacco pipes and animal bones.

It is not yet clear whether there is any more Roman archaeology on the site as the dig has only reached the post-medieval stage.

The finds were put on display to visitors on Tuesday and there were also tours of the building site.

Kylie McDermott, a finds and archives officer, said: “The earliest piece we have is Roman pottery, found in the post-medieval layers.

“There could be more Roman archeology there, we don’t know yet.”

Ms McDermott said her favourite piece was a plate decorated with images of pomegranates. She said: “It’s from about 1670 to 1690 and is called a charger, which is a type of dish.

“The bones are probably sheep or goat and the piece of vertebrae was butchered, so it was probably someone’s dinner. Each piece will be sent off to a specialist.

“We are just pulling back the layers. When we do the assessment stage we will be able to pull everything together.” Experts began digging on the site in September and uncovered nine walled burgage plots.

These were used to grow food or keep animals and were laid out when Henley was planned either side of what is now Market Place.

A full excavation was required as a condition of the planning permission after an archaeological evaluation in 2010 uncovered a series of 17th century walls across the site. Wells dating from the late Victorian period had also been uncovered.

Gwilym Williams, project officer for AOC Archaeology, of Twickenham, said the burgage plots appear not to have changed since the 12th or 13th century and could give an insight into what Henley was like at that time.

He said: “We are now in the early post-medieval or late medieval horizon. What’s very exciting is that we have been digging both rubbish pits and garden features.

“We will be able to construct a life path for each plot from the Victorian period back to the beginning of Henley and compare each of those plots. We will be able to see what access people had to goods throughout the Thames Valley.”

Catalyst Capital is to redevelop the mews into 23,000 sq ft of shops and 14 flats to be known as Gardiner Place. This is scheduled for completion in early 2020.

Ruth Gibson, secretary of the Henley Archaeological and Historical Group, said: “The finds so far are not terribly interesting because we are still in the top layers and can’t tell where they come from.

“The really interesting thing is we are finding burbage plots as they were laid out in the 1200s.

“So often with major developments in town centres they are built over many times.

“When they take the walls down and excavate underneath I’m really hopeful they will find medieval layers which haven’t been disturbed for many centuries.”

Mrs Gibson said the presence of Roman pottery didn’t necessarily mean there were any Roman settlements in the town.

She said: “If there were Romans in Henley we would have found a lot more by now. It’s out of context at the moment.

“The most interesting parts are still to come. Hopefully it will bring us back to the medieval and pre-medieval times.

“We are looking to find stuff from the Bronze Age, certainly Iron Age and maybe the Romans too.”