CBBC stars are game for a laugh at theatre 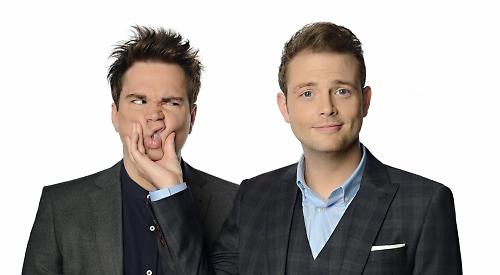 OVER the years there have been many different ways that comedy and light entertainment double acts have come together.

Often they will have grown up together or met at university.

But perhaps one of the more surprising routes is as rivals in a singing competition.

When Sam Rhodes and Mark Nixon met back in 2003, they were rivals on Pop Idol. As the series progressed, they realised they had similar senses of humour.

When it came to the final, the lads finished third and second respectively behind Michelle McManus.

But since that time, following a brief foray into the music business, the pair have together carved out a successful career on children’s television.

Among the shows they have worked on are CBBC’s Copycats, Sam and Mark’s Guide to Dodging Disaster, and Big Friday Wind-Up.

Now they are bringing their “On the Road Show” to theatres across the country, including Norden Farm Centre for the Arts in Maidenhead on Monday, August 12.

The show, which starts at 2pm, promises an unmissable hour of entertainment jam-packed with sketches, jokes and games for all ages to enjoy.

“The live show is essentially a television game show with fun for all the family,” says Sam.

“There are five rounds, including
dressing-up games. It is a concept that we have been taking around the holiday camps for a few years and this year we decided to try taking it to theatres.

“We had a short run of six shows in the May half term, and we had lots of happy faces, so we decided to go for a longer run.”

Mark adds: “It is a show aimed at all the family and they can be the stars. We get six people — one adult and a child from each family — and there are rounds based on popular TV shows. It is a lot of fun and something that we aim to be entertaining for the parents as well as the children.”

Given their familiarity with recording TV shows in front of a live studio audience, how does the live theatre experience compare?

For Mark, it’s the honest — and unedited — opinions of the children taking part that makes the difference.

“I really love the instant reactions,” he says. “Even when you have a studio audience the show is nearly always pre-recorded and there is a different kind of buzz with a truly live show. Plus, children are not slow in saying what they think.”

Sam adds: “It’s great, you get the instant reactions — but that also makes it scary and adds extra nerves. There are no cuts or
re-takes. Whatever happens, happens, and that keeps you on your toes. I really love live performances.”

There is a saying that “two heads are better than one”. Do the lads think being a double act is helpful in that respect?

“We are basically two friends having a laugh,” says Sam. “When we are on stage, we always have each other’s back and we can step in if we need to.”

For Mark, the importance of the partnership goes beyond just the time they are together on stage.

“Well, it does mean there is 50 per cent less work!” he laughs. “But perhaps more importantly, we have been together as a double act for 16 years. He is almost like a brother to me and I think that companionship when you are on the road touring is a great thing.”

If it hadn’t been for Pop Idol and that chance meeting 16 years ago, what paths would Sam and Mark’s careers have taken?

Up to a point Mark did follow one of his career choices — though not in as exotic a location as he might have wished.

“When I was a child, we went on Thomson Holidays and I really enjoyed the children’s clubs. That led to me wanting to be a children’s entertainer working abroad. I am also a massive football fan, but sadly did not have the talent to go with it.”

Perhaps Mark is being a little modest. He is an ardent Wolves fan and played in the testimonial games for both Matt Murray and Jody Craddock — the latter as part of a Wolves XI.

Sam was following his career path until Pop Idol caused a rapid change of course, and something he perhaps wisely kept quiet about.

“I wanted to be a chef,” he says. “I grew up watching Jamie Oliver in his Naked Chef programmes.

“I started on a course at catering college and then along came Pop Idol and I never finished the course.”

However, that catering course later came in very handy when he was approached to take part in Celebrity MasterChef.

Both Sam and Mark are now married with children of their own. Which prompts the question, which of their fellow celebrities would they most like to have child-mind for them?

“Well it’s got to be Justin Fletcher aka Mr Tumble for one,” says Sam. “Then Jamie Oliver to teach them how to cook — he’s got loads of children himself so he would be used to it. Then I think Sir Paul McCartney. I always used to sing Blackbird to my daughter and she really loved it.”

As for Mark? “Oh, I agree with Justin. Then I think Andy Day — my daughter is mad on his programme Andy’s Dino Fun. Then, I think I need someone to make sure they get to bed on time, so Danny DeVito.”

There will be no need for child minders at Sam and Mark’s show at Norden Farm, tickets for which are £11 with concessions £9. There is also a “Family and Friends” ticket for four people priced £36.

The show is recommended for children aged six to 12 years and has a running time of one hour.