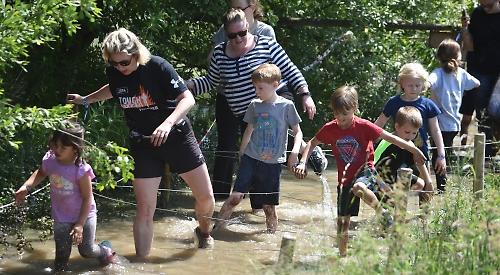 A TV presenter and an actress were among a record 10,000 people who attended this year’s Little Welly Goes Wild event.

The 3km children’s fun obstacle course was held at Greenlands, near Henley, on Saturday and Sunday.

This was the fifth year of the event, which began in 2014 when 400 people took part. This year’s course had 38 obstacles, including a water slide, a climbing frame, foam pit, swinging ropes, monkey bars, A-frames and balancing beams.

Among those present were adventurer and TV presenter Ben Fogle and his wife Marina and actress Emilia Fox.

Henley Mayor Glen Lambert gave out medals to the children who took part on Sunday. Paul Badger, who runs Little Welly with his partner Rachel Hughes, said: “It went really well and was the best one we have done.

“It has surprised us how quickly the event has grown — our customers have been very loyal and supportive.

“To get 10,000 people is huge when you think about some of the events that happen in Henley.”

Other attractions included zorbing, a helter skelter, Wacky Wheelers race cars, laser tag, pony rides and team-building exercises for families. There was also children’s entertainment from Bertie Slippers and Carl the Magician and music from Duvet Days and Ed the Drummer, who ran drumming workshops for children.

Mr Badger said: “We want to make the event different each time and improve the course and change the activities.

“We scour the country looking for new ideas.”