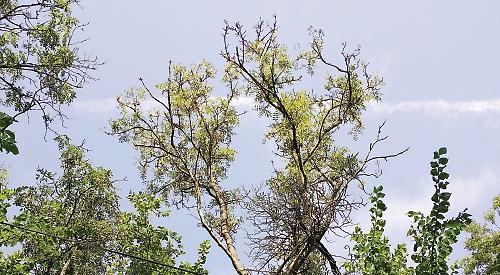 IN October 1987 I was preparing to go to work in London when I realised that something had occurred.

Leaving home, I saw that trees had been blown down and in some cases were blocking the roads.

Many of the fallen trees had been superb old specimens.

Only on my return from a tortuous journey did I begin to understand the true extent and impact of the Great Storm.

Over the following weekend I visited many woodlands and the level of destruction became apparent.

The beech trees were the main victims of the huge storm that ripped through the Henley area and much of the South. New Copse at Gallowstree Common was largely flattened, as were many other beech woodlands in our area. Some were cleared of fallen trees, others just left as they were for nature to take its course.

As a result the sky was suddenly open to other species of tree to fill the void and one of the first to capitalise on this opportunity was the ash (Fraxinus excelsior).

Now this coloniser of the former beech woods is itself under threat from a fungal pathogen called ash dieback (Hymenoscyphus fraxineus, which is ripping through some of our woodlands. Young ash saplings seem to be the most affected as I noticed at Clayfield Copse in Emmer Green and Bottom Wood, near Whitchurch.

Older trees such as those near Rotherfield Peppard that I examined seem to be unaffected but I will be keeping an eye on them.

An infected tree will display a distinct symptom when the leaves in the crown curl up and die.

This is, of course, not the first time that there has been a threat to some of our native tree species.

In the late Seventies, I witnessed the demise of our lovely elm trees due to disease (Ophiostoma ulmi). Once common, a mature elm specimen is a rarity these days.

Many years ago the lane that led to Mapledurham after passing Lilley Farm was a true green tunnel of elms. Now all you will find are some rotten stumps as a reminder.

There are plenty of healthy oak trees about and some truly ancient ones. Oaks can grow to an immense age and there is a wonderful example by Scot’s Farm, near Checkendon. If you bend down you can see right through it!

The heartwood has gone and the tree is not very tall but I like to think that sometime in the distant past it grew from an acorn buried by a forgetful jay.