‘Plea for peace’ brings month of remembrance to a timely close 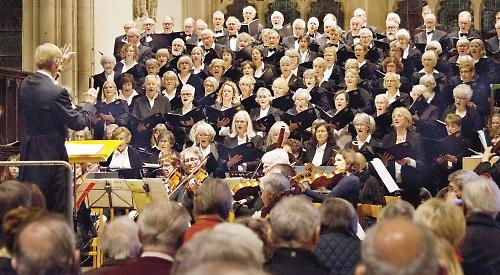 THIS well-attended concert — titled “A Plea for Peace” — brought nearly a month’s worth of national First World War remembrance activities to a timely and comforting conclusion.

The programme chosen by the Benson Choral Society with the Elgar Orchestra for their tribute to the fallen began with Edward Elgar’s Serenade for Strings in E minor.

Written and first performed at the end of the 19th century, this gentle and quintessentially English work is a poignant reminder of a bygone age, before all reason was set aside and the world engaged everyone in mindless conflict.

The Elgar Orchestra, under the direction of its guest conductor, Ian Clarke, set the mood for the evening perfectly.

To perform Gabriel Fauré’s Requiem (Opus 48) the choir and orchestra were joined by soprano Eleanor Stevens and baritone Daniel Tate, who was a last-minute replacement for the advertised baritone soloist, Philip Tebb.

Of all the great requiems this Fauré masterpiece is regarded by many as the most restful and ethereal. The choir caught the mood of the work immediately and sang it consistently with admirable sensitivity and exceptionally clear diction.

There are many memorable melodies and tender, comforting moments in this mass — probably the most famous being the soprano solo, Pie Jesu. Eleanor Stevens sang this from the heart with a simplicity and purity of tone which sounded truly angelic in the reverberant abbey.

Ralph Vaughan Williams’s Cantata Dona Nobis Pacem (Give Us Peace) occupied the second half of the programme.

VW, as he is known, had played his part in the First World War as a stretcher-bearer and felt compelled to write this cantata in 1936 when ominous signs of war preparation began to appear in Germany.

The cantata is an emotive work in which the soprano soloist makes a plaintive appeal for peace, to be answered strongly by the baritone soloist with emotive extracts from Walt Whitman’s poems describing the brutality of war. You would never have guessed from Daniel Tate’s commanding and confident delivery that he did not have this work in his repertoire prior to this engagement.

The version of the work used in this performance was a 2017 arrangement by Jonathan Rathbone that calls upon reduced instrumental forces but with a full percussion department to reveal the full horror of war.

This worked very well in Dorchester Abbey, enabling an unforced, natural balance to be maintained between instrumentalists and singers.

Ian Clarke’s immaculate direction of the ensemble and obvious empathy with the performers added confidence and encouragement to deliver a consistent and meaningful interpretation of the whole programme.