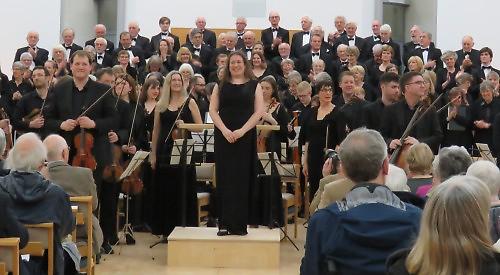 THIS predominantly choral concert was given by the Pangbourne Choral Society with the Southern Sinfonia conducted by Ellie Calvert.

It got off to a boisterous start with a gutsy performance of Poulenc’s Gloria for soprano soloist, choir and large orchestra.

Although Poulenc himself maintained that he was essentially a religious composer, his sense of humour usually managed to assert itself irreverently somewhere in the mix. This was certainly evident in the opening movement of the work in which very loud and very soft bars of dissonant music followed each other like a string of balloons exploding to great effect.

The soprano soloist, Danae Eleni, made her dramatic first entry in the third movement, her crystal clear tones carrying well above the orchestral accompaniment. Her contrasting entry in the fifth movement, which is dark and mysterious, was also atmospheric and very well judged.

Ellie Calvert kept the music flowing smoothly but held enough energy in reserve to ensure that the final triumphal return of the opening fanfare justified the work’s title of ‘Gloria’.

Wagner’s symphonic poem, Siegfried Idyll, followed. This delightful gem was originally written for a small chamber ensemble, to be played at dawn as a Christmas present to his wife, Cosima. It also served to celebrate the birth of their son Siegfried, portraying a bucolic picture and using some of the themes from Wagner’s opera of the same name.

Technically this work was performed competently, but lacked some of the warmth and spontaneity that its very nature demands. It is not an easy work to put together, requiring a degree of common interpretation among the players whilst also responding to the graceful, but strict, demands from the conductor’s podium.

The second half of the concert was given over to an authoritative and satisfying performance of Puccini’s Messa di Gloria. Originally written as a graduation exercise and first performed in 1880 this gem was not published in the composer’s lifetime, nor performed again until 1952. It is not a true Messa di Gloria but a full catholic mass in which some movements are very short. The work gives a fascinating insight into how Puccini was still developing his musical style.

It was clear that the choir enjoyed performing this youthful piece and were very responsive to their conductor. There was no holding back! The quiet Kyrie that opens the work was followed by a boisterous Gloria in which the choir lost no time in demonstrating how powerful one hundred voices can sound when called upon to do so, while also maintaining their musical integrity.

Tenor and baritone solos were tastefully interjected by Adam Tunnicliffe and Robert Garland respectively. The work ended quietly when both soloists joined with the choir in a short period of reverent reflection, dona nobis pacem. Perfect!