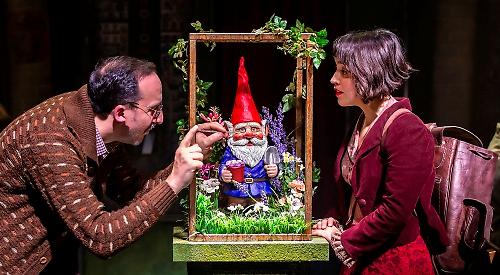 THERE seems to be no challenge that the phenomenally talented actor/musicians at The Watermill Theatre in Bagnor can’t rise to.

The stage adaptation of Amélie has opened in a blaze of publicity, and has proved to be an extraordinary production that is fast-moving, quirky, at times very funny, and full of French atmosphere.

French-Canadian Audrey Brisson is perfectly cast as Amélie, delivering a flawless performance that makes the most of her lovely voice and acting skills born of a lifetime in showbusiness and with just a nod to her background with the Cirque Du Soleil.

You will know that the story of Amélie started life as an iconic French film, but this stage production takes the essence of that and turns it into much more in the hands of the outstanding Watermill cast under the direction of Michael Fentiman.

Daniel Messe’s music is performed expertly and with panache by the cast, who are rarely off stage, singing and dancing energetic musical numbers or providing atmospheric background as required of them.

They are all stars of the show, but it has to be said that Caolan McCarthy’s impersonation of Elton John went down particularly well with the press night audience, as did Dik Downey’s two wonderful puppets so ably brought to life by Oliver Grant.

Another undoubted star of the show was the incredible set designed by Madeleine Girling. To say it was imaginative and impressive would be an understatement.

The effectiveness of the vignette of Amélie’s flat high above the stage and the clever use of the photo booth will have to be seen to be fully appreciated, all enhanced by fantastic lighting by Elliot Griggs and very efficient sound by Tom Marshall.

The story of Amélie’s strange childhood that resulted in her living far more in her imagination than in reality, and of having more interest in other people’s lives than in her own could not have been better or more entertainingly told.

Forget the film, it’s now time to see the musical.

Amélie is running at the Watermill until Saturday, May 18, before touring the UK — including week-long visits to the Wycombe Swan and New Theatre Oxford in June. For tickets, visit www.watermill.org.uk and www.ameliethemusical.com