I love walking in woodland among those ever so important trees 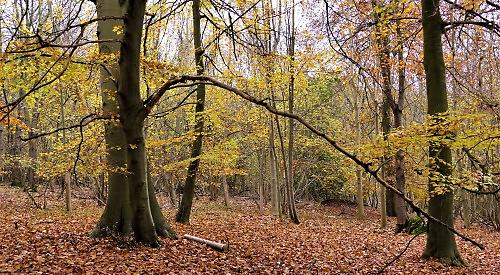 IN the run-up to the general election, our major political parties suddenly pledged to plant millions of trees across the United Kingdom, primarily to counteract the amount of carbon dioxide in the atmosphere.

Their promise of huge planting projects is laudable but whether the new government adheres to its promises we’ll have to see.

The need to plant millions of trees is imperative but apart from their sequestering CO2 there are other sound reasons to do so.

At the moment only 13 per cent of the UK’s land is forested, the lowest percentage in Europe.

One project suggested (I believe independently) would create a two-mile wide strip of new woodland stretching from Land’s End to John O Groats.

This would provide a wonderful natural corridor for wildlife to spread and hopefully nullify inbreeding in isolated biological communities.

With the pressure of the increasing human population on our island, the need to increase our tree coverage becomes even more important.

Trees absorb an amazing amount of CO2. In return they release the oxygen that we and every animal needs to breathe.

Trees do much more than that though. Apart from healthy trees that sustain a massive range of invertebrate and vertebrate life, dead and decaying ones do so too.

Woodpeckers, nuthatches, treecreepers, owls, titmice and pied flycatchers rely on these to breed.

They either drill a hole, shore one up or find a suitable crevice or other hole in which to nest. When the dead tree eventually collapses little critters like stag beetles home in.

Their larvae can spend sometimes over five years munching through the dead wood to emerge later as adults. Fungi, so essential for life itself, return nutrients to the soil and form an important association with both the living and the dead.

The Daily Mail has launched a campaign to encourage its readers to engage in planting trees and the Henley Standard has reported over recent weeks on various and splendid tree planting projects.

This is magnificent not only because it is happening but that so many children have been involved. Let’s hope that the trees thrive and mature like the youngsters that helped plant them. Whenever I walk in the woods I become happy, whatever the season or weather. I feel that the trees are somehow aware of my presence.

I read that going for a walk in the woods is very beneficial to mental wellbeing and I for one believe it.

Spotting a badger, a herd of deer, a fox, field mouse, vole, shrew, hedgehog or rabbit brings a smile to my face.

I grow trees in pots and when ready I plant them in a suitable spot. A little judicious watering helps them on their way to maturity. My friend Dave Kenny has planted hundreds. Just poking an acorn, pip or other seed or nut directly into the earth will help.

As I ponder the wonder of trees, Rosemary Henderson, my mum and I are tucked inside the warmth of our beloved Black Horse pub at Scot’s Common once again.

We’re in for a drink and yet another bacon sarnie.

Leaving my mum behind, Rosemary and I are taking a different tack today. We head south-west through the woodland to join a lane that takes us south-east and on to some open country.

A buzzard and a pair of red kites ride the wind. We spot a male kestrel on a telegraph pole. It promptly flies down into the field to pick up something (perhaps a worm or beetle) and returns to the pole.

It is a really handsome bird with distinct plumage, a slate grey head, copper wings and creamy-buff breast with speckles. We’re happy to see it.

We turn right at the narrow road that leads to Hammond’s End and Wheeler’s Farm and then right once more towards Scot’s Farm.

Re-entering the woodland, we admire the trees, mainly beech, yew, holly and English and sessile oak with the odd crab apple.

Someone has planted some lawson’s cypress which I find distinctly odd. Eastern hemlock-spruce is also present and regenerating.

Afer picking mum up, we drive home via Stoke Row and Highmoor Cross. There are handsome and colourful trees all along the way. We need many more of them.

Lovely as the countryside is in winter, I can’t wait for spring.