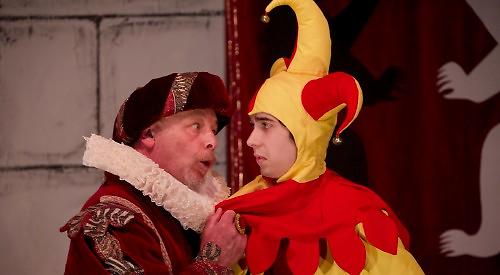 CHRIS Moran’s Wyrd Sisters saw Liz Carroll and Melanie Sherwood reprise their roles as Nanny Ogg and Granny Weatherwax, who were familiar to the Progress Theatre audience from a previous production based on another Terry Pratchett novel.

They were joined by a new, naïve, but very determined young witch, Magrat Garlick (Yvonne Newton), to comprise a coven bent on redeeming the kingdom from an unscrupulous regime.

How can witches, even with their powers, circle the kingdom in one evening as a spell demands? Ingenious special effects show you how it’s done — to great comic effect.

The power of words is central to the action: is it possible to change reality with magic words or made-up “truth”?

All cast members do a terrific job of delivering Stephen Briggs’s script, with its witty wordplay, allusions to fairy tales and smatterings of Shakespeare.

Carroll and Sherwood are forceful and funny as the two older witches, their earthy attitudes set off by the more mystical approach to witchcraft of their new recruit Magrat; Newton offers a poised and charming foil to Ogg and Weatherwax.

At the core of the kingdom’s troubles is the corrupt and duplicitous Duke Felmet. Jack Goodman is charmingly insincere in his dealings with his shrewish wife Lady Felmet (Ali Carroll), but we see the Duke crumbling under the weight of his past misdeeds.

Echoing Lady Macbeth, he rubs and picks at his hands to remove imaginary blood, progressing to sandpaper and a cheese grater to do the job as his obsession takes hold.

Since a troupe of actors is important to the plotline, there is a cast within a cast. George Prové is deliciously “luvvie” as lead actor Tomjon — and also as the demon with the unpronounceable name.

Credit also to Dean Stephenson as the drippy fool who turns out to have some answers and also wins the lady of his dreams.

Wyrd Sisters under Chris Moran’s creative direction is vibrant and polished — and very, very funny. This production makes for a thoroughly entertaining night out — it’s a triumph!