Beautiful and odd-shaped trees ignite my passion for the Chilterns 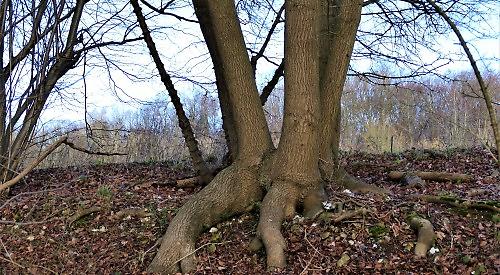 WE recently bought a coconut shell filled with suet from a local garden centre and hung it outside.

Within a couple of days a pair of nuthatches (Sitta europaea) discovered this new food source and now come every day to eat.

They are delightfully attractive, small birds with their peachy-coloured breast, slate grey back, long, pointed bill and dark, blackish stripe that runs through the eye.

On a tree trunk they always proceed in a downwards fashion, unlike the treecreeper that ascends.

A pleasure they are to watch too. They seem oblivious to our presence. Is it trust or are they short-sighted? Whichever it is it is something special to watch them.

Walking around the garden in the morning one little fellow mimics the sound of a mobile telephone. I reach into my pocket and laugh.

This gregarious bird can be easily overlooked but if you see one up close do take note of its iridescent plumage that shines like a little rainbow on its wings.

A pair collared turtle doves settle in a maple (Acer platanoides drummondii) and a pair of red kites twist and turn over next door’s garden awaiting a ritually supplied breakfast after a considerable mewing session.

As I’m about to retire indoors a gang of long-tailed tits invade the garden in search of small insects. They resemble a flock of dainty flying teaspoons.

Our podgy robin bullies us for his breakfast too.

So much to see in a relatively confined space.

Over the last 40 years I’ve noticed that some once familiar birds seem to have largely disappeared. It was once commonplace to hear the song of a chaffinch, the “pew” of a bullfinch or the trill of a greenfinch. Not so often now.

Their food sources have diminished and, as Isabella Tree writes in her inspirational book Wilding, “birds are, in a very real sense, our canaries in the mine”.

Later, we draw up outside the former King Charles Head pub at Goring Heath in Rosemary’s car and make our way through a kissing-gate into the ancient cherry and walnut orchards at Collinsend Common.

Replacement trees that I believe were taken from cuttings from the oldest trees fill the voids left by their ancestors.

A swathe of snowdrops is in full flower. Our route along the northern edge of Long Ground Plantation is initially mired but soon becomes easier going.

To our left, whitebeam and wild service trees grow on an old bank cheek-by- jowl with oak, hazel, ash and cherry. Dog’s mercury and woodruff are emerging from the damp earth. Such promise.

Further along a pair of hybrid black-poplar trees lean over a winter-sown field. A stand of old oak trees occupies the wood’s corner on the hill’s crest.

A beech tree plays host to an ivy of gargantuan proportions, its sinewy “trunk” like a botanical snake. A pair of red kites play chase above. We think that they’ve chosen a nesting site in a tall old tree.

There are some fine views across the valley and into Mapledurham.

We make our way downhill towards Bottom Wood. Many more ash trees have been felled since my last visit in the autumn due to dreadful ash-dieback disease. Some but not all reveal telltale signs of infection in their heartwood.

My friend Dave Kenny alerted me to this recent clearance. In true woodland stewardship, new trees have already been planted. Dave and I were worried for the welfare of two rare mezereon (Daphne mezereum) bushes along one of the woodland rides where the felling had taken place. Later, he let me know that all was well but I had to see for myself.

The stunning small shrubs and setting are undisturbed and their beautiful, four-sepalled pink flowers that precede their bluish-green leaves should be emerging within a few weeks. Relief all round.

Otherwise heavy machinery has grubbed up primroses and some spurge laurels. Unavoidable, I suppose, but they’ll return.

Leaving these elegant plants behind, we continue westwards. Some tall Douglas firs (Pseudotsuga menziesii) that had previously escaped my attention sway in the strong wind. Beech trees creak.

On the ground hundreds of beech saplings fill the large gaps between their elder relatives’ silvery-smooth trunks. Some ivy has taken hold. Field maple, wayfaring tree, holly, hazel and wild privet, now sporting winter’s purply leaves, make up the rest of the understorey.

We head north along a track that takes us past the open field’s edge. To our left and at the southern boundary of Coxsetter’s Wood the same tree species grow on the old earthworks, a lovely mixture of wild service, whitebeam, cherry, oak, hazel and ash.

We enter the woodland and head east to a distinct and sharp corner skirting an ancient ditch. At the very end a massive, spiky old hawthorn stands proud.

Its close neighbour is another wild service tree that looks like the leaning tower of Pisa with its distinctive fissured and plated bark. It is old but has a vice-like grip on the earth.

Young branches tilt at the sun, some still bearing the bronze-coloured and desiccated leaves of last autumn.

Below a vast number of native bluebells are emerging from their winter slumber. There are huge examples of butcher’s broom here and a good head of healthy foxgloves and buckler fern too. Handsome, delicate mosses adorn large flints and the stumps of long-gone trees.

As we navigate the wood, it is impossible not to remark on the strange shapes that some of the trees have taken. One beech in particular resembles a sylvan tuning fork. Others are contorted in the most bizarre fashion.

We regain the old path. To our right a line of old hollies, to our left a plantation of larch now filled with silver birch.

We head home to await delivery of our own mezereum and wild service tree to plant in the garden alongside some native bluebells.

Wild, windy and bright it has been and enjoyable in the extreme. We’ve only visited a small part of a private estate where I have been given permission to roam in memoriam, a great act of kindness from the owner.

I love our local area with a passion and will fight to preserve every bit of it.