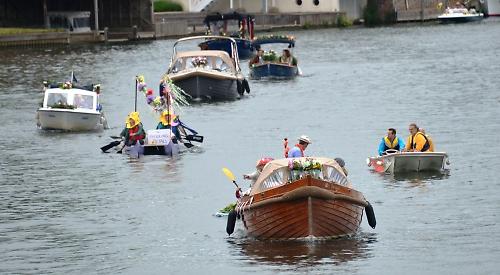 The alternative gardening festival will involve events in and around the town from May 16 to 24.

Organisers Victoria Newton and Jane Macfarlane-Duckworth unveiled their plans at a launch event at the Bull on Bell Street.

Other ideas include displays, workshops, training and educational events at the Old Fire Station Gallery in Upper Market Place, which has been hired for the duration of the festival.

Sue Turner, who runs Candela Clinical Hypnosis in Reading Road, Henley, has offered to run a hypnotherapy and meditation session there.

The Henley Quakers will have their usual “peaceful garden” event on May 17 at the Friends Meeting House in Northfield End.

It is hoped that Badgemore Primary School in Hop Gardens will also be involved.

It has had a new pavilion built by the school of architecture at the University of Reading. It hopes to have a new greenhouse gifted by Greys Court in place in time for the festival. The Barn Galleries, near Remenham, want to hold a meditation and nature-based event for children, while Holistic Core Restore will run a session on core strength for gardeners.

There will also be a talk on sustainable floristry and funerals by Ms Macfarlane-Duckworth and a forest walk in Hambleden.

The sculpture garden is set to be held in Nuffield, while garden writer Liz Ware has put forward the idea of the “silent space” trail at various venues around the town, including the Quakers’ garden, Freemans Meadow and the community orchard off Paradise Road.

Jan Mirkowski, who runs Fairmile Vineyard, will run tours and tastings once again. The festival will finish with the traditional floral flotilla on the final day. Boats will muster at 2pm at the Mill Meadows moorings.

Owners will then decorate their craft with flowers, fruit, vegetables or anything horticultural.

The vessels will go upstream to Marsh Lock and then turn round and go under Henley Bridge to Phyllis Court Club before returning to the moorings for picnics and music on the bandstand until 4pm.

The festival is supported by, but independent of, the Chelsea Flower Show.

She said: “As long as it ticks the boxes, it’s welcome. It can range from an activity in a garden, in a horticultural setting, or it can be training or informative sessions about gardening or an open community garden.

“Don’t be put off that it’s called Chelsea Fringe Henley because if you’re outside the town I’m sure we can welcome you as part of it.”

Ms Macfarlane-Duckworth said: “The more successful events are those that have a much more quirky aspect to them.”