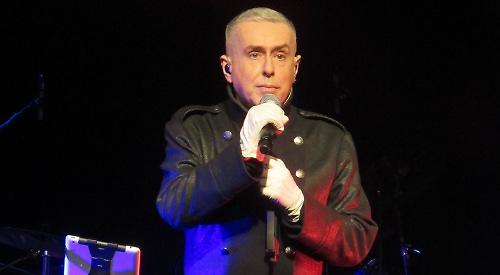 THE Human League and Holly Johnson will be the headline acts at Rewind South this summer.

The Eighties music festival will take place for the 13th year at Temple Island Meadows in Remenham from Friday to Sunday, August 19 to 21. Tickets will go on sale at 9am on Friday.

The Human League, a synth band who comprise Phil Oakey, Joanne Catherall and Susan Ann Sulley, will take to the stage on the closing night. They previously appeared at Rewind in 2013, 2014, 2017 and 2018.

The Sheffield band have had 15 top 20 singles including Don’t You Want Me, Mirror Man, Love Action and (Keep Feeling) Fascination and have sold more than 20 million records worldwide.

Headlining on the Saturday night will be Johnson, the 61-year-old lead singer of Frankie Goes to Hollywood, who were best known for their hits Relax, Two Tribes and The Power of Love. He last appeared in 2015.

The main stage show on Saturday will be hosted by Clive Jackson of glam rock band Doctor and the Medics while Sunday’s host will be Pat Sharp of Greatest Hits Radio. On the Friday night the Eighties-themed nightclub, Pink Flamingo Club, will be returning with a performance from The Specials.

The band’s singer Neville Staple will also host the riverside stage welcome party that night. The rest of the weekend in the club will feature DJ Gary Davies and Rusty Egan.

The festival will also feature a fireworks display on the last night, a silent disco, funfair rides, a kidzone, inflatable church, shops and stalls.

Executive producer Steve Porter said: “This is a really strong bill that brings what you would expect from Rewind — a solid line-up of classic Eighties artists.

“I can’t wait to see Holly Johnson and The Human League again as they are really strong headliners but also Scritti Politti, who have not played Rewind before.

“There is something for everyone and two days of classic Eighties music. We are always looking to bring the best acts we can to the main stage — 22 acts over two days is quite a challenge but we constantly seem to hit all the right notes.”

Mr Porter said he was pleased to be holding Rewind again after it was cancelled in 2020 because of the coronavirus pandemic and last year it took place with restrictions. “To be able to get the festival going at all last year was incredible,” he said. “Seeing all the fans back with us was such a buzz.

“To be able to plan 2022 without any restrictions feels like we have the good times back again and we can’t wait. Hopefully, looking at the way things are going, we will be restriction-free this year.

“Of course through the planning process we will be working with all the authorities and should there be any requirements we will work with everyone to ensure all the artists, staff and audience are safe.

“Our greatest wish is that we are all back to partying the way we used to. You can expect three nights of great entertainment, camping and glamping and two days of amazing bands and artists on the main stage.

“There is also the Pink Flamingo Club, the silent disco, inflatable church and top quality food and drink — it will be a fantastic weekend.”