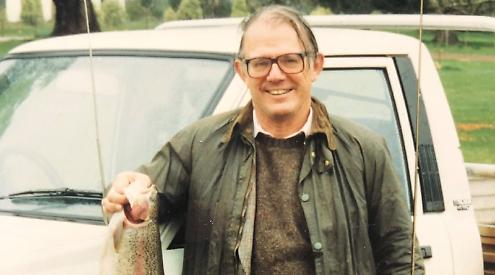 JIMMY REMNANT was born in London in 1930, around the same time that his grandparents moved to Bear Place, near Wargrave.

When the war came in 1939, he also moved to the village to escape the bombing.

He vividly remembered standing on the terrace looking eastwards towards London and seeing the inferno of flames during the Blitz.

Aged nine, Jimmy was packed off to St Ronan’s, which relocated to Devon for the duration of the war.

Thence to Eton where he enjoyed success both on the academic front and on the sports field, notably in the field and wall games. He was president of Pop.

After National Service with the Coldstream Guards, he went into the City. He was a partner of Touche Ross by the age of 27, looking after some of the firm’s more entrepreneurial clients, such as Michael Heseltine and Nigel Broackes.

It was through Touche Remnant, which he co-founded in 1970, that Jimmy’s reputation in the City was defined. It became one of the leaders of the asset management world, specialising in investment trusts. Jimmy always maintained that investment trusts were managed primarily for the benefit of the trust shareholders, whereas unit trusts were managed with the interests of the managers predominating over the interests of investors.

Relative performance would tend to support this view. Some 50 years later, the Touche Remnant trusts now form the core of the Janus Henderson investment trust business.

After the death of his father, Jimmy and his family themselves moved to Bear Place in 1968, following a short time in Surrey where they became firm friends with the local curate, one Desmond Tutu.

Bear Place had a small farm which never paid its way but did boast a herd of pedigree Guernsey cows. The cream was sold to Jacksons of Piccadilly. Each day it was driven up to London and deposited on the doorstep before the store opened.

In 1980, the family moved nearby to Bear Ash. The new owners of Bear Place built some rather pretentious gates by the East Lodge. The local constabulary never did discover who fixed a pair of garden gnomes to the top of the supporting pillars.

Jimmy was heavily involved in local activities. He was president of Wargrave Cricket Club, the highlight of which each year was the Remnant side, consisting of family and friends, playing against the village.

There was always a sumptuous lunch beforehand, washed down by wine from Jimmy’s small vineyard which he had planted and cultivated himself. The wine would not have won any prizes from Decanter magazine but it was very drinkable.

Perhaps the most impressive part was the label which Jimmy persuaded John Piper to design.

Over the years he was also president of the Wargrave Local History Society, Loddon District Scout Association, Wargrave and Shiplake Regatta, the Royal East Berks Show and the Henley & District Agricultural Association show.

More widely, Jimmy enjoyed his country pursuits. He took up fishing relatively late in life and caught his first salmon at the age of 66.

For many years he was part of Guy Alvingham’s shoot at Bix.

He committed himself to many charities during his life, most notably the Salters Company, the YMCA, the Florence Nightingale (Nursing) Foundation, Learning Through Landscapes and the Order of St John. He was treasurer of the Royal Jubilee Trusts Charity at the time of the Queen’s silver jubilee in 1977, for which he was awarded the CVO, and subsequently became chairman.

The Church of England was also central to Jimmy’s pro bono work. He was Patron of the Living at St Mary’s Church in Wargrave and so responsible for appointing new vicars when necessary.

He was a commissioner of the Church of England for eight years and was the Christian co-ordinator for the Interfaith Foundation.

Jimmy had a warm and inclusive personality and, despite his achievements, a modest grace which was much to be admired.

He had great passion for his work and many interests as well as a keen sense of humour.

Courteous and charming, he treated everybody the same way, young and old, from senior executive down to the tea lady.

He leaves his wife, Serena, to whom he was married for 68 years, three sons and a daughter, eight grandchildren and seven great grandchildren, who already miss him hugely.