I sailed the Atlantic in 70ft yacht with 19 other people 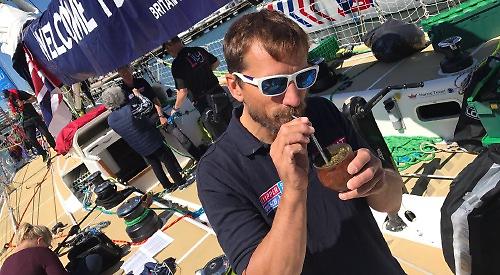 GRAHAM BELL is proud to have been part of a crew that won a sailing race across the Atlantic.

The former Olympic skier and TV presenter, of New Street, Henley, was one of 20 people who competed in the opening stage of the 11th biennial Clipper Round the World challenge from Liverpool to Punta del Este in Uruguay.

He and his crewmates, who were sailing under the name Great Britain, set off in their 70ft ocean racing yacht on August 20 and reached the South American port town, about 6,400 nautical miles away, at 3.22am on September 22.

They were third across the finish line but scored the most points as they had played their “joker” before setting off. Each crew can only do this once during the challenge and their score is doubled at the end of that leg.

Bell’s crew, who were up against 11 others in identical yachts, sailed south through the Irish Sea and along the western European and African coasts in what was the longest stage of the overall race.

The Britons have continued without him and are now in tenth place. The race leader is a crew from American card payment and financial technology company Greenings.

The Britons left Merseyside in second place behind the Chinese crew Qingdao but lost time in the “doldrums”, a zone off the west African coast where winds are light and vessels can get stuck for days making little progress.

They slipped into fifth place but then overtook two of their rivals on the final stretch along the Brazilian and Uruguayan coastlines.

Bell, 51, who skied for Britain in five Winter Olympics between 1984 and 1998, signed up for the race on the advice of his friend Charlotte Evans, a GB skier and Paralympian sighted guide who took part in the previous one.

He said: “I had done a little bit of sailing before but never on this level. It’s such a long time to be away and it’s so remote — they say that once you’re in the middle of the ocean, the next nearest people are on the International Space Station! The most important thing is to put in a consistent performance because there’s so much fortune involved in ocean sailing. The plans you make can be pretty much thrown out of the window from one hour to the next.

“Everyone apart from Andy Burns, the skipper, is an amateur and it will be interesting to see how much they’ve improved as sailors by the end.

“It felt pretty good to finish, although it was a long time coming. We were very happy with the result. It’s amazing that after almost five weeks at sea we were only a few hours behind the second-placed boat.

“I take my hat off to the guys who are doing the whole thing because it’s such an incredible undertaking.

“I’ve been sending messages of encouragement and will be following them all the way online.”

The British crew was split into two “watches” who took turns to sail and navigate the yacht in shifts of between four and six hours.

Bell was his deputy watch leader for part of the journey and was responsible for organising and motivating the rest of the team. Individuals would take turns to perform “mother watch” in which they cooked food for the rest of the crew in a kitchen below deck.

Bell said: “That wasn’t a good duty to have because if the seas were rough you’d be down there all day, sometimes while the whole boat was keeled over at a 35 degree angle.

“Some of us fared better than others in choppy conditions. It makes it very, very hard to get into a bunk — it’s a bit like staying in a caravan that’s being tipped over at a slant and periodically rocked from side to side.

“It’s physically demanding because you’re constantly using your upper body to steady yourself. I struggled with seasickness in the first three days but it passed and luckily I wasn’t sick.

“The hardest thing was doing anything below deck, really. Using the toilet wasn’t easy with the boat on its side and hammering through the waves.

“We also had to ‘wool’ the spinnaker, which is where you pack it away ready to be launched again. It takes about an hour lugging this massive sail around in the sweltering heat and sometimes I’d have to stop for air while my nausea subsided. One day I had to climb up the mast and tape up a part of the sail which was starting to come loose. I was in a climbing harness but it was pretty frightening as it was at least 70ft tall and although I’d done repairs in port, it was very different in the middle of a rough sea.”

His wife Sarah and children Louis, 22, and Lottie, 18, could follow his progress on the race website and read his blog posts but there was no telephone link and they could only exchange emails every few days.

Bell said the competitive atmosphere kept him motivated through the hard times and he bonded well with his crewmates.

He said: “I was constantly checking our position on the race viewer as well as watching the weather forecast and making sure we were adjusting our tactics appropriately.

“We had a few experiences where it was two steps forward and one back but we’re a competitive bunch and were determined to pull together.

“I should also add that it wasn’t always difficult. There were periods when the sailing was easy and we’d have music up on deck with the sun shining. If it was nice enough, you could stick a bucket over the side and have a wash with sea water.

“It was incredible to sit there and harness the power of nature to propel you along. We saw pods of dolphins playing in the water and leaping into the air and we were also followed by seabirds catching fish as they leapt out of our way.

“The sailing was worst in the doldrums as we were sat there with the water lapping up the sides and were not getting very far. It was much better when we were crashing through the water at full speed.

“I actually found the watch system quite easy to get into. No matter what was going on around me, as soon as I hit my bunk I’d pass right out. I loved the physicality of the whole thing and must have lost a stone in weight.

“My arms and hands also got really strong, although the skin on my palms is tough and thick from lugging all the ropes around.

“I definitely want to keep on sailing and the next step for me is to get my yacht master’s certificate so that I can charter boats, though I think cruising is more my style than flat-out racing!”