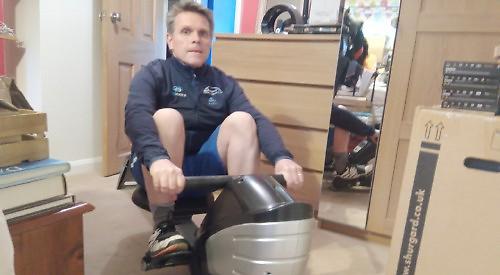 Dominic Renshaw, 47, set himself the challenge after his plan to trek 1,150km to the South Pole was delayed by the coronavirus pandemic.

He is now using his rowing machine at home in Shiplake Bottom, Peppard, while in lockdown with his wife Jane. He has little else to do because work at his marketing business has dried up and he has furloughed himself.

He started the challenge on April 20 and hopes to complete it on Tuesday, his birthday, after rowing more than 50km a day. He will have completed the equivalent distance of 27 marathons by the end.

Mr Renshaw rows from 8.15am to 3.30pm, taking short breaks to rehydrate and change his clothes, a running top and shorts. By the end of each session he has burned about 5,000 calories but says he doesn’t like to dwell on the hardship because NHS staff are having a much tougher time.

Mr Renshaw said: “I’m starting to feel it but, let’s be honest, the NHS is supporting everybody and they’re not complaining. They’re having to work a lot harder than I am. What I’m doing may seem hard but they have been doing it for six or seven weeks now.”

While rowing, he listens to the radio or calls membewrs of his family to keep his mind occupied.

“I listen to a lot of music,” he said. “I also have a little platform with my PC so I can Zoom or Skype people. Day eight was hard.

“I was really on my knees but it’s always like that with long challenges. You think ‘I have got to keep going’.” Two years ago, Mr Renshaw climbed Mount Everest and raised more than £15,000 for the Thames Valley Air Ambulance.

Now he wants to break the record for the fastest solo, unsupported and unassisted journey to the South Pole. The record is currently 24 days, one hour and 13 minutes, which was set by Norwegian Christian Eide in 2011.

To make a donation, visit https://bit.ly/2WaGQKR