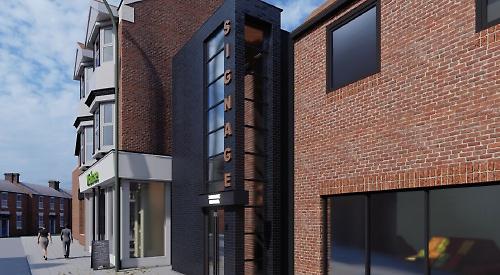 NEW plans for a boutique cinema in Caversham have been drawn up.

Hermes, of London, wants to convert the Caversham Health and Fitness Club unit off Church Street into a three-screen complex and also create new ground-floor office space at nearby Archway House.

The cinema would be above the Waitrose store next door with the main entrance at street level via a staircase currently used by Caversham Solicitors, whose offices would also be converted.

A new lift would be installed and the frontage would be extended by 1.2m, which the developer says would not affect visibility along the pavement.

A rear entrance to the gym would be kept as a fire escape.

The screens would be located at the rear of the building. One would have 94 seats and the other two would have 77 and there would also be a 21-seat function room.

There would be a bar, restaurant and foyer for ticket sales with “general lounge spaces” to create a “vibrant environment”. The Sixties building has three storeys, the topmost of which forms part of the gym, but this would be knocked through to make way for the taller screening rooms.

A “semi-mature” ornamental apple tree outside the entrance would be removed and another of a similar species planted further along the street nearer the pedestrian crossing.

Hermes has also offered to install planters along the pavement outside.

The work would form part of the renovation of St Martin’s Precinct, which was approved by Reading Borough Council in 2015 and also includes new restaurant units and flats.

The first phase of the scheme, a refurbishment of the precinct, was carried out in 2017.

Hermes originally proposed building a cinema above the Iceland store behind the precinct and later above Superdrug on the main street.

It says the latest scheme will complement the ongoing regeneration and the gym unit is an ideal location as it is big enough not to require a significant extension.

The firm says the black brick and aluminium facade proposed for the front entrance would complement the existing buildings.

It expects many customers would walk to the site rather than using the car park to the rear, which is shared with Waitrose, so does not propose creating extra spaces.

The company’s agent Turley says there are “ongoing discussions” for the gym to move somewhere nearby.

It says: “The applicant has reviewed the scheme in order to reflect current commercial interests and requirements to deliver a scheme which will support the long-term vitality and viability of the centre.”

Waitrose says it isn’t against a cinema in principle but the proposed entrance is very close to its own and this could block access if there were queues.

It also fears cinema customers may park in bays designated for shoppers.

A neighbour has called for a planning condition to be imposed to stop the owner converting the cinema into a night club in the future. They also want a 20mph speed limit introduced on the main road.

The Caversham and District Residents’ Association welcomes the idea but says the black frontage would be out of place and a replacement gym must be provided.

It also says the extension would create two enclosed alcoves which could become “unpleasant, litter-strewn and open to abuse”.

One possible location for a new gym is the former New Directions outreach campus, which is at the rear of the premises off Archway Road.

The adult training college ran the service from a single-storey temporary building before shutting it in 2017 and relocating it to its main base in Whitley.

The 0.1-hectare site, which is fenced off, comprises mostly car parking spaces and has been vacant since the closure.

Hermes is seeking planning permission for a change of use of the land and says it would seek to offer more facilities than the existing gym as demand is expected to increase. It has been in talks with a potential operator.