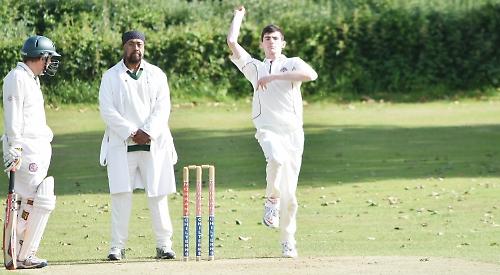 HURLEY had to settle for a Premier Division draw at LITTLEWICK GREEN last Saturday.

The visitors won the toss and opted to bat under heavy skies and howling winds.

Skipper Akhtar misread his own script as he chased a wide ball in the third over and played on. Josh Cole skewed the pace of Matt Wood to point where slip had time to run round and take the catch. Hurley were in danger of imploding at 12-2.

Dave Simoes and Vik Bhagwani added 24 before Simoes fell to Will Brockwell. Henry Graham laid an early claim to man-of-the-match with some powerful straight driving, and his partnership of 67 with some deft touches from Phil Ridgeway took Hurley to 145-5 when Graham dollied to mid-wicket.

Hurley’s innings was boosted by 44 extras as 24 byes and eight wides jollied along the score. Jonathan Langlands added some hard hitting in the last three overs adding 20, taking the visitors to 191-9 from 47 overs.

After tea Hurley had the home side reeling on 65-7 inside 26 overs. Naeem Akhtar and Henry Graham made the early inroads with Langlands taking out the lower middle order. The highlight was Josh Cole’s catch at long leg as he made good ground to pluck Akhtar low down.

Two wickets to Langlands in the 32nd over left Littlewick tottering at 100-9 with 11 overs remaining. Matt Wood belied his number eight billing with a confident and untroubled innings.

Chris Symonds defended resolutely with only one scare as he fended off Graham where the ball landed between short leg and square leg. With the wind strengthening Littlewick settled for the draw at 164-9.

HARPSDEN 2nds held out for a draw away at Division 1 league leaders DENHAM.

On winning the toss, Harpsden skipper James Brooks opted to field first on what looked like a good pitch.

The Harpsden opening bowlers, Abdul Khaliq and Rod Birkett, started well and kept Denham to 22 off the first 10 overs. Butt then decided to chance his arm and did so successfully, putting particular pressure on Harpsden’s change bowlers. Brooks was to get the first breakthrough with the score on 84 as he bowled Lupton behind his legs with some clever around the wicket bowling. Patil came in to join Butt and although taking risks they pushed the score quickly on to 155-1 in the 28th over before Matt Stanley took the first of his three wickets in just four overs as he had Patil caught behind by his father Jon.

Harpsden came back well from 155-1 as Denham fell away to 223-9 through some good fielding, which included a direct hit from Brooks, an over the shoulder running catch by Shazad Gulfraz and some clever bowling, particularly from Abdul Khaliq.

However, by this time the first signs of a deteriorating pitch were beginning to surface as variable bounce kicked in. Denham got up to 257 in the final over of their 47 before another direct hit, this time from Khaliq, ended their innings.

The deteriorating pitch didn’t take long to claim its first two Harpsden victims as Desai accounted for both Tim Mitchell and Oscar Radcliff and at 1-2, Harpsden were staring down the barrel of a potentially massive defeat.

The reason this didn’t happen was due to sound batting from Justin Bradley and Sasha Burgess. Despite balls popping off a length, and on occasion balls even full of a length, both batsmen got well forward to smother the increasing number of balls that didn’t get more than a few inches off the ground.

The result of this pitch deterioration was that it became exceptionally difficult to play any attacking shots except to full tosses. Burgess was clinically in dispatching the full ball whilst Bradley’s stout defence kept Harpsden in the game as they toiled away in search of a draw.

Bradley was unfortunate to be the next to be sent back to the pavilion to one that didn’t bounce but by that time 29 overs had been bowled and Harpsden were able to bring pinch hitter Will Bevan to the crease to see if he could eke out another batting point or two, but after a good 24 he was beaten by a good ball from Gahunia.

This was preceded by the dismissal of Burgess for 86 in what was one of his best innings for Harpsden as it was compiled in such trying conditions. Burgess was to be the fifth victim of the ball that literally didn’t bounce.

Two overs later Matt Stanley was to be the fifth and final victim of the bounceless ball as Brooks and Jon Stanley saw Harpsden home to a well deserved draw.

After a selection week fraught with player dropouts for various reasons, 10 men arrived to take on the visitors who themselves were also missing an 11th man.

Hurley skipper Clive Williams won the toss and chose to bat first and he and Abdullah Ali assembled their third half-century opening partnership of the summer. With the score on 52, the introduction of John Lucey saw Williams miscue a long-hop straight to Mike Duxbury at mid-off.

Joined by Nally Fernando, Ali upped his own strike rate but lost partners as first Fernando drove over a full ball from Leakey that clipped the top of the stumps, then Matt Williams, after a few good contacts, was back when he might have been forward and departed lbw.

Hurley were 81-3 with more than half the overs gone, but the tide turned again when Scott Taylor joined Ali. The pair added 35 in six overs, before Ali became Leakey’s third victim.

Steve Taylor joined Scott and the pair added 52 in eight overs. On 58, Scott tried to hit Jack Hesom into the cow field but found only Duxbury on the boundary. This brought in Greg Double for his first second team outing for two years, and he and Taylor brought the total up to 190 and in sight of the fifth batting point.

With overs running out, Double and Taylor tried to manipulate the strike and to take whatever singles were on offer — or not — as it proved when Double tried to manufacture a leg-bye out of a ball that stopped almost dead off Taylor’s pads, but failed to beat the ball to the striker’s end.

Dave Walton also fell trying to get Taylor back on strike, leaving Hassan Gul to face the final ball of the innings, with one run to get for 200 and the final point. He missed it and Hurley had to settle for 199-7, with Taylor not out on 24.

In reply Littlewick Green hit 54 off the first 12 overs from Hurley’s new-ball pair of Scott Taylor and Alexander Williams. Taylor bowled with pace and swing but without luck, as edges fell short of the slips. Meanwhile, from the Shepherds Lane end, Williams achieved occasional bounce but nothing went to hand until James Herron slapped a wide ball to Scott Taylor at cover and departed.

Hoping to exploit the wearing pitch, Williams introduced first Hassan Gul and then Steve Taylor. Lucey swung wildly at Gul and presented Double with a simple stumping. The two Hurley spinners bowled well but Williams’s aggressive fields meant that anything short or leg-side tended to go to the boundary and another 50 partnership took Littlewick to 120-2, requiring 80 from 17 overs. At this point Gul’s impressive control of line did for Leakey as he attempted a drive to a ball well outside off, and Steve Taylor at cover took the catch.

After an eight-over spell Gul needed a rest and Fernando took over at Shepherds Lane. His second ball induced another false shot, this time from Duxbury to Scott Taylor at cover point to leave the visitors on 140-4.

With 13 overs left and 60 to win Dave Walton bowled Green for 47. Sethi joined David Herron, finding some gaps to put loose balls through, and added 22 in four overs.

Hurley refused to go on the defensive and got their reward when Walton found the toe of Herron’s bat and Double ran from behind the stumps to collect the catch to leave the visitors on 164-6.

Scott Taylor returned, this time at the Shepherds Lane end and he hit the stumps twice in his first over to remove Hesom and Sethi. The first ball of his next over removed Sethi’s off stump from the ground, giving Hurley victory by 25 runs and 29 league points.