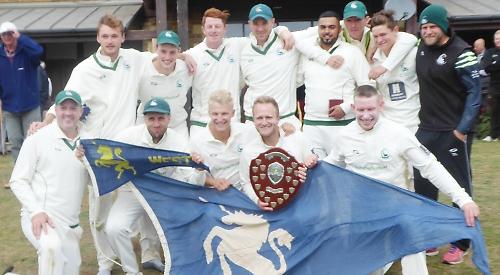 BERKSHIRE have won the MCCA title for the third year running after defeating LINCOLNSHIRE, the runners-up on each occasion, by an innings and 32 runs at Banbury with more than a day and a half to spare.

“It’s a testament to the skilful players that we have got and the hard work we do outside the summer,” commented skipper James Morris.

“We try to go about everything in a really professional manner. It’s something that has been picked up by opponents and umpires.”

They have now gone four seasons without losing a championship game, a remarkable run of 27 games.

“I think you can safely say, we are the best minor county side in the country and our aim is to make sure that continues,” added Morris.

Pace bowler Mungo Russell, whose four early wickets on Sunday morning put Berks in control, was voted the man of the match.

He and Henley’s Andy Rishton were both presented with match balls to mark their five-wicket hauls in the game.

Next year Berkshire will attempt to emulate Devon, who won the Championship four years running from 1994 to 1997.

Morris said they would also target the treble — the Championship, 50/50 Trophy and the Twenty20 tournament which they won at Walmsley last month.

As a player and coach, Berkshire performance manager Tom Lambert has now collected a remarkable 13 trophies for the county.

Unlike their two previous final encounters, Berkshire dominated this week’s final from start to finish against a young and much-changed Lincs side from last year.

Having won the toss on Sunday, Berkshire bowled first on a green wicket and, after taking the first four wickets for just 35, they bowled out Lincs for 198 with Ealing paceman Russell claiming 5-57 from 17 overs.

In the two previous finals, Woods and Jack Davies had earned the respective man-of-the-match awards with centuries, and the teenagers played another vital role this week.

Woods hit 98 — one run more than last year — and Davies 73, the pair putting on 139 for the second wicket to lay a solid foundation for their side’s only innings.

There were also useful contributions from the Morris brothers, James (46) and Richard (37), as well as Rishton (25) before Stewart Davison (23) and Tom Nugent (25), smashed 50 in 16 minutes off the last five overs of the innings, enabling their side to close on 405-7 from 90 overs. Lincs didn’t help their own cause by conceding 45 extras, which included 25 byes, most of which were due to the ball being caught in the wind after passing the stumps.

With a hefty deficit of 207, Lincs made an encouraging start second time around, reaching 61 without loss, but then Rishton was brought into the Berkshire attack, which was missing their leading wicket-taker Chris Peploe due to illness, and it all changed in unexpected fashion. Henley’s medium-fast bowler had gone for 31 runs in five overs on Sunday, being called for five no-balls. But a day later, with the windy conditions more in his favour, he showed great accuracy and took the first four wickets to fall at a personal cost of 24 runs in seven overs.

By the close of play on day two, which had seen 17 overs lost at the start due to drizzle, the Eastern Division champions had moved on to 124-4.

Within 55 minutes of play resuming on Tuesday, it was 157-7 with Nugent being rewarded for bowling superbly against the wind, taking three wickets with two lbws and a catch behind by Davison.

Rishton claimed his fifth wicket of the innings to finish with 5-33, while Peploe took two wickets in the only 10 balls he delivered in the second innings, so completing a famous victory.

In the last three seasons, Berkshire have won three Western Division titles, three Championships, one 50/50 Trophy and one Twenty20 competition.