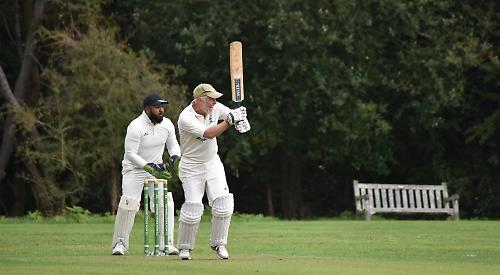 MATT RAVDEN scored an unbeaten century to lead PEPPARD STOKE ROW 2NDS to an 82-run home success against WARFIELD, securing victory in the Plate final of the BCL Division One August Cup.

The hosts suffered a disastrous start as openers Rob Simmons and Henry Thorby fell cheaply, but Jake Sedgwick (49 runs) and Ravden redressed the balance with a fine third-wicket stand.

Ravden — who elected to play cricket rather than competing in the Frilford Heath Golf Club Championships — made sure his decision was vindicated as he racked up a 122 runs.

Aaided by a late flourish from Matt Vines (40), Peppard set an imposing 268-4 from their 40 overs on a fantastic batting track at Peppard Common. Sam Laing (83) looked in fine touch for the away side as they set about their challenging total, but with James Watts
(4-39) and Sedgwick (4-21) among the wickets, they ultimately fell short and were bowled out for 186.

Peppard benefited from a brace of catches from Vines and Owen Ravden, as well as three more regulation grabs from youngster Sedgwick.

Riaan Ackerman and Mikey Hennessy (40) gave Peppard a solid base, and with under-14 player Nick Murdoch (21) impressing on his Saturday adult debut, the hosts were able to accelerate through Lambert (58) and Sam Kimber (33 not out), totalling 195-6 in their 40 overs.

Abingdon School pupil Archie Malcolm (3-48) proved the pick of the home side’s attack in reply, but contrasting knocks from Akeesh Khokhar (45 from 29 balls) and Matt Jones (43 not out from 73) enabled Farley Hill to reach 196-5 with an over to spare.

But it was still a weekend to celebrate for Matt Kimber’s men. Wokingham 6ths defeated West Reading 3rds in the final game of the BCL Division Two/Three August Cup and Peppard’s better net run rate ensured they finished runners-up.