My mum said I needed a part in Emmerdale 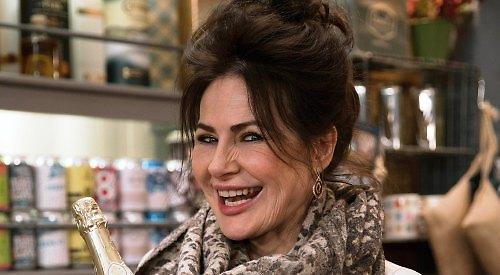 FORMER Sonning Common schoolgirl Sally Dexter has made her mother proud after landing a role in Emmerdale.

The 56-year-old actress, who attended the village primary and Chiltern Edge School, has joined the cast of the long-running ITV soap as the chaotic and wayward Faith Dingle.

She takes over from Gillian Jephcott, who appeared between 2000 and 2004. Her character left the village but was reintroduced this month as a mystery woman sleeping rough in a barn at her brother-in-law’s house.

In a new storyline this week Faith, the former wife of Shadrach Dingle and mother of his children, Cain and Chastity, was accused of murder while attending the wedding of stalwart villager Robert Sugden and his partner Aaron Livesy.

Ms Dexter, who grew up in Bramley Crescent, Sonning Common, has previously appeared in Poldark, A Touch Of Frost, Holby City and Dalziel and Pascoe and she won an Olivier Award for her stage work in the Eighties.

She played Nancy in the 1994 West End revival of Oliver!, for which she received an Olivier nomination, and has had a number of roles with the Royal Shakespeare Company.

Her mother Joan Dexter, who still lives in Sonning Common, is happiest with her latest achievement as she is a big fan of the programme.

Ms Dexter’s agent offered her the part in November and filming started a few weeks later.

She said: “It was perfect timing because Mum had recently told my sister, ‘what she really wants is a part on Emmerdale’. I then got the offer and Mum was delighted that her wisdom had finally shone through!

“It was a pretty quick turnaround because episodes are only shot about three months before they’re broadcast.

“I was quite busy at the time and it looked like there was going to be a clash with some stage work.

“In the end I was able to do both but I’d always have chosen Emmerdale anyway because Mum loves it so much. For now I’m trying to raise my profile through television work but ultimately I’m hoping to do more work with smaller theatre companies.

“I was very familiar with the programme for obvious reasons and I’ve always felt something of a connection with it. I’ve also got a real affinity for country life, even if my character is far from a natural country woman!

“She’s a very outrageous person and different from other parts I’ve played. I absolutely adore Faith, though — there’s something of a wannabe Zsa Zsa Gabor about her.

“She has a fabulous dress sense, which I wish I had, and she really knows how to pack a suitcase. The amount of clothes she brings with her to the village is just incredible.

“Faith also reminds me of Blanche from A Streetcar Named Desire. She definitely ‘depends on the kindness of strangers’ and her naive optimism really shines through. Her heart’s in the right place even if she doesn’t always do or say the right thing.

“Mum has, of course, seen my performances and she loves the clothes, though she’s told me off a few times for Faith being horrible! She’ll ask me, ‘what did you do that for?’

“That’s the joy of soaps, though. You can talk about them with tongue in cheek but they’re written with real heart and cover all kinds of issues that affect people in their everyday lives.

“They bring people together and get them talking and I’m proud to be a part of that.

“I don’t know how long I’ll be involved or what I’ll do next but that’s the thing about both soaps and real life — you never know what’s around the corner.”

Ms Dexter, who now lives in London with her long-term partner, was born in Yorkshire but moved to Sonning Common at age seven and grew up there with her mother, father Ted, who died in 1998, sister Christine and brother John.

She has fond memories of her school days as well as the old King James’s College in Henley and says her teachers played a part in her career choice.

She said: “I remember the primary school headmaster Mr Johnson and Mr Pitson as well as Jane Arch, whose son David is now musical director of Strictly Come Dancing.

“She was very supportive, as was Jane Day, who encouraged my love of singing and performing. I played recorder and guitar as a child and that’s how I discovered a passion for music.

“I don’t actually know when or how I got the idea to become an actress. I think I just liked the sound of it so I’d tell everyone that was what I planned to do and it became self-fulfilling.

“Peter Allen, who taught English at King James’s, was really lovely and inspiring. They all were, to be fair — they put up with me being wayward and frankly a bit rubbish. I was terrible at doing my work back then.”

Mr Allen, who became assistant principal when the college was rebranded as The Henley College, encouraged Ms Dexter to apply to the National Youth Theatre. She said: “I applied because I didn’t have any better ideas about getting into the profession. I was successful and I’m pleased to say it was a fabulous experience.

“There’s nothing like being young and living in Camden with a group of like-minded people, all wearing leg-warmers and pretending we were in the cast of Fame!”

Ms Dexter still returns to South Oxfordshire regularly and enjoys walking through the countryside, especially around Greys Court and along the Thames Path through Henley.

She said: “I came back for a family birthday only last week — we were all crammed into the Pack Saddle at Mapledurham. It’s such a lovely part of the world and I’m very lucky to have grown up there.”