Visitors have whale of a time at Venetian rowing festival 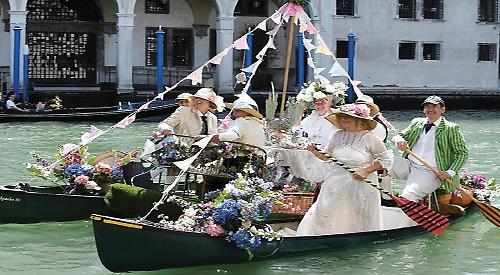 IF you think the traffic jams in Henley are bad, they’re nothing compared with what Geoff Probert experienced last month.

He owns Molly, the Henley Whalers’ boat, which took part in the Vogalonga, a non-competitive recreational sporting event for amateur rowers that takes place annually in Venice.

More than 2,000 boats made up the flotilla, which ensured there was massive congestion on the city’s famous waterways.

Molly, a replica whaleboat, was taking part for the 10th time in the event’s 44-year history and had a full crew of 11.

The 22-mile course starts at St Mark’s Square and takes in the islands of Burano and Murano before re-entering Venice at the Cannaregio and then follows the Byzantine-Gothic Grand Canal.

The Venetian boats such as the sandalo, puparin, caorlina and gondola are these days outnumbered by visiting vessels but the Vogalonga is a colourful water-borne procession accompanied by the sound of oars and the cheering of crowds.

Geoff, who lives in St Mark’s Road, Henley, said: “There were about 2,000 boats and 10,000 competitors, which we are pretty sure is a record number for the event, which started out as a protest against motor-borne traffic.

“The procession is from 9am to 3pm and some people finish early while some finish later as some stop for lunch half-way.

“We tend to go as far as we can before having a break as there is a traffic jam getting into Venice which we try to avoid.

“We ended up waiting for about 45 minutes to get back in whereas some were there for two-and-a-half hours. It was very crowded and it was very hot, about 25C.

“It is very colourful and there are all types of boat and you get all the locals sitting out and having lunch and waving and applauding and we give a salute to them. They love it.” Molly also took part in the VelaRaid in which small sailing boats explore the shallow waters of the Venetian Lagoon.

She won this event and also came third in class in the Velalonga sailing race.

The prize for the tidiest boat in the former event went to another Henley-based boat, Swallowboat Bayraider Llafurio, owned by Steve Morton.

Another Henley vessel that took part in the Vogalonga was Ed and Maggie Atkinson’s The Floating Lawn, which many people will have seen at the booms during Henley Royal Regatta and the Henley Festival.

It comprises two canoes linked by an artificial grass floor topped by a lace-covered table, candelabra, metal peacocks, a gramophone and a bone china tea service, surrounded by a crew in Edwardian-style attire.

The vessel made its debut at St Mark’s Square for the start and then paddled sedately up the Grand Canal to the Cannaregio and back again to the delight of the crowds.“Only the English,” someone called out.

Maggie, who wore her wedding dress, said: “It was our 30th wedding anniversary celebration so we wanted to do something special and we couldn’t think of a higher calling for The Floating Lawn. It was completely nutty and extraordinary.”