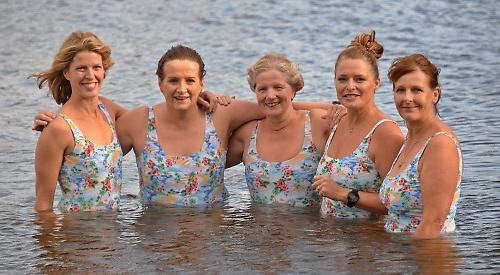 FIVE women planning to swim the Channel have been told they can probably go ahead with the challenge despite the coronavirus restrictions.

The Henley Mermaids, who are all members of the Henley Open Water Swimming Club, were due to swim 21 miles from Dover to Calais this week.

A new date has to be arranged but the women have been told to expect a call so are continuing to build their fitness despite not having access to leisure centre pools or being able to swim in the sea.

The women are raising money for Henley Music School, which is run by Laura Reineke, of Berkshire Road, Henley.

She is one of the five, together with teacher Susan Barry, of Cromwell Road, Henley, nurse Fiona Print, of St Mark’s Road, Henley, politician Jo Robb, from Shepherds Green, and sales director Joan Fennelly, of Makins Road, Henley.

Mrs Reineke has been exercising at home during the lockdown and has been increasing her open water training in the River Thames in past two weeks.

She said: “We have been told that we should be able to do the swim this year as there are lots of overseas people that won’t be able to have their slots.

“It will be later than we had planned but that isn’t a bad thing because the water will be warmer. We are getting all our paperwork finalised and then we just have to wait for a phone call. We will have to wait for the next government announcement, I think.

“It will be a bit weird because it won’t be quite as we had planned. Our families won’t be able to come down and cheer us on — we will just have to go there and back on our own.”

Mrs Reineke lives with her husband Antony, who runs Studio 35 jewellers in Duke Street, and their three children, Ava, Mae and Alfie.

The school has offered online classes during the lockdown.

Mrs Reineke managed to raise £17,500 in three weeks by appealing to local businesses for support, while the fundraising challenge has so far raised £6,321.

She said: “We have been overwhelmed with support from local foundations and individuals. If I had been furloughed, the charity would save £4,000 but if I was unable to work then we couldn’t raise the money to continue as we have been.

“Then I had the mission to raise the rest. I am so delighted. It was an extremely stressful few weeks.”

Mrs Reineke said the phone call could come at short notice, adding: “We have spoken to our boat pilot, who is waiting for confirmation on various things.

“Most of us have June 1 to 10 booked off as annual leave, so there will have to be a quick call around to everyone to check if they can go for the swim and if they can then great and if not we will have to say no and go another time.

“We are all keeping fit. We have been doing gym classes at home, running, walking and swimming in the river. But we haven’t been able to do any drills in the river, so I think we will need a bit of grit and determination.”

The relay swim is likely to take about 14 hours with each woman swimming for an hour at a time.

Mrs Barry, a mother of three who teaches at Emmer Green Primary School, said: “I am a bit apprehensive but I am just hoping it will go ahead because we are up to speed with the training and it would be a shame not to get to do it.

“The only thing we haven’t been able to do is practise in the sea but that might be possible in the next couple of weeks. I have been taking the opportunity to get up early and go cycling with the roads being so quiet.

“It could be tricky for me to get away from work during term time at short notice, but hopefully we can name a date.”

Mrs Print, who works at Townlands Memorial Hospital in Henley and the Royal Berkshire Hospital in Reading, has been going for runs after work.

She said: “I have been trying to exercise every day, which has been difficult because I have been doing my job at Townlands and also at the intensive care unit in Reading.

“The crisis is much quieter now but it is difficult because we don’t know when the swim is going to happen.

“I have taken two weeks off to do the swim and we all work, so it will be more difficult to negotiate a time. Luckily, I have lovely and supportive colleagues in Henley.

“These are weird times for everyone but we really want to the swim this year. As the restrictions ease we hope to be able to get in the sea. We haven’t done that since last year, so it could be quite daunting.

“We are up for it, though. You have to have a positive mental attitude and we have put so much into this and it would be disappointing if we didn’t do it.”

Mrs Robb, who is a member of South Oxfordshire District Council representing Woodcote and Rotherfield for the Green Party, said: “It has been the worst preparation anyone could have had for a Channel swim.

“Swimming was never explicitly banned but all the leisure centres have been closed so all the indoor swimming and fitness training we would have been doing were lost.

“I have been doing some running and yoga but you need to be able to get out and do swimming, which we have been able to do only in the last couple of weeks.

“I would prefer if it was in July. If it was sooner, I would be anxious, but still quietly confident that we could do it.”

Mrs Fennelly, who normally swims outdoors all-year round, said: “When the lockdown started, we were all in the groove with our training schedule so when the pools shut down it was a bit of a blow.

“We have been trying to keep up our fitness as much as possible. We have all been working hard.

“I know we all have the grit and when we get a phone call that we will get on with it. I have every confidence that we will do it.”